The ICC International Maritime Bureau (IMB) is calling for regional and international players to sustain their efforts, particularly in the Gulf of Guinea, as global piracy and armed robbery incidents reach their lowest levels since 1992.

Perpetrators were successful in gaining access to the vessels in 95% of the reported incidents which are broken down as 85 vessels boarded, four attempted attacks, and one vessel hijacked. In many of the cases vessels were either at anchor or steaming when boarded, with nearly all the incidents occurring during the hours of darkness.

Though these are amongst the lowest reports in decades, violence to crew continues with 27 crew taken hostage, six assaulted and five threatened. The risk to the crew, however petty or opportunistic the incident, remains real. 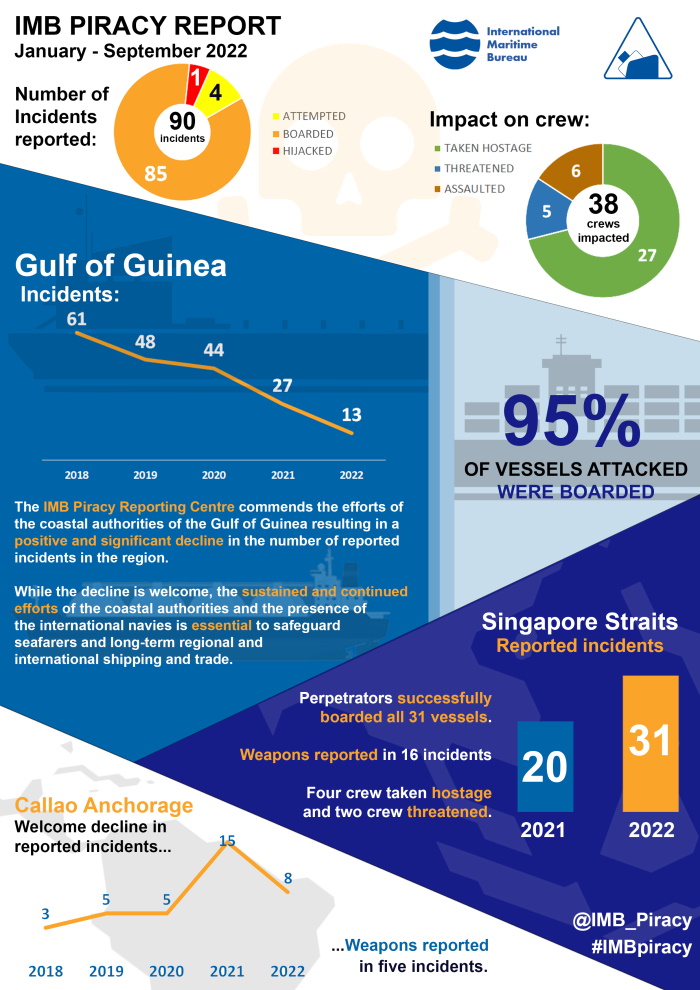 No room for complacency in the Gulf of Guinea
Of the 90 global piracy and armed robbery incidents, 13 have been reported in the Gulf of Guinea region – compared to 27 over the same period of 2021 – signaling a positive and significant decline in the number of reported incidents in the region off west Africa which emerged as the world’s biggest piracy hotspot in recent years.

IMB Director Michael Howlett said: “We commend the efforts of the coastal authorities of the Gulf of Guinea. While the decline is welcome, sustained and continued efforts of the coastal authorities and the presence of the international navies remain essential to safeguard seafarers and long-term regional and international shipping and trade. There is no room for complacency.”

Incidents on the rise in the Singapore Straits
Incidents in the Singapore Straits continue to increase with 31 reports in the first nine months of 2022, compared to 21 in the same period last year. Vessels underway, including several large vessels and tankers, were boarded in all 31 reports and in most cases, ship stores or properties were stolen. Crews also continue to be at risk with weapons reported in at least 16 incidents, including some involving very large bulk carriers and tankers. 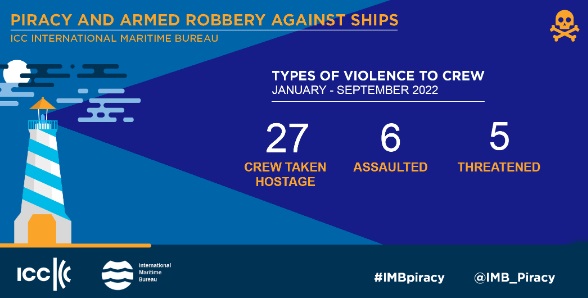 IMB Director Michael Howlett said: “While these are so far considered low-level opportunistic crimes, with no crew kidnappings or vessel hijackings, littoral states are requested to increase patrols in what is a strategically important waterway for the shipping industry and for global trade.” 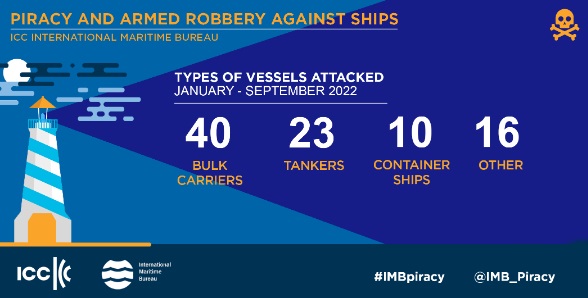 The IMB Piracy Reporting Centre also believes there is a degree of underreporting as well as late reporting of incidents from these waters and encourages Masters to report all incidents as early as possible so that local authorities are able to identify, investigate and apprehend the perpetrators.

South Americas
The number of reports from Callao anchorage in Peru has dropped from 15 in the first nine months of 2021 to eight in 2022. Additionally, five incidents have been reported at Macapa Anchorage, Brazil including one on 30 August, where six security and duty crew were assaulted and tied up by perpetrators who boarded an anchored bulk carrier. 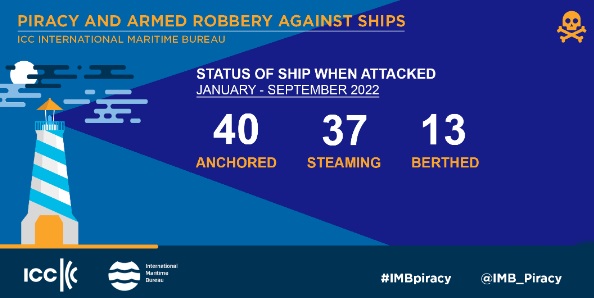 IMB Piracy Reporting Centre
Founded at a time when seafarers had little option to report incidents, IMB PRC remains a single point of contact to report all crimes of maritime piracy and armed robbery, 24 hours a day. Since 1991, their prompt forwarding of reports, and liaison with response agencies, broadcasts to shipping via GMDSS Safety Net Services, and email alerts to CSOs, all provided free of cost, help the response against piracy and armed robbery globally.

As evidenced by the standing up of multiple regional cooperation, reporting, and response mechanisms, its reports have over time increased awareness, resulting in the allocation of adequate resources to make waters safer.
Source: International Maritime Bureau