The SHADE, or Shared Awareness and De-confliction Conference, saw representatives from a number of nations, international organizations and members of the shipping industry join together to discuss combating piracy and broader maritime security issues across the Middle East.

Each year, CMF and EU NAVFOR co-chair the conference, which includes working groups and expert guest speakers to discuss issues that affect maritime security, as well as ways to improve cooperation between the mutually interested parties.

Due to the current global health pandemic, the SHADE Conference was held as a virtual event, hosted from the CMF Headquarters in Bahrain with attendees participating virtually via a video link.

“I want to thank all of our guests and speakers who took part in this year’s successful SHADE Conference,” said Commodore Dean Bassett Royal Navy, Deputy Commander of CMF.

“The Conference is a dialogue which encourages all viewpoints and ideas on best practice to help drive ever closer cooperation and engagement between maritime forces and industry in the region.” 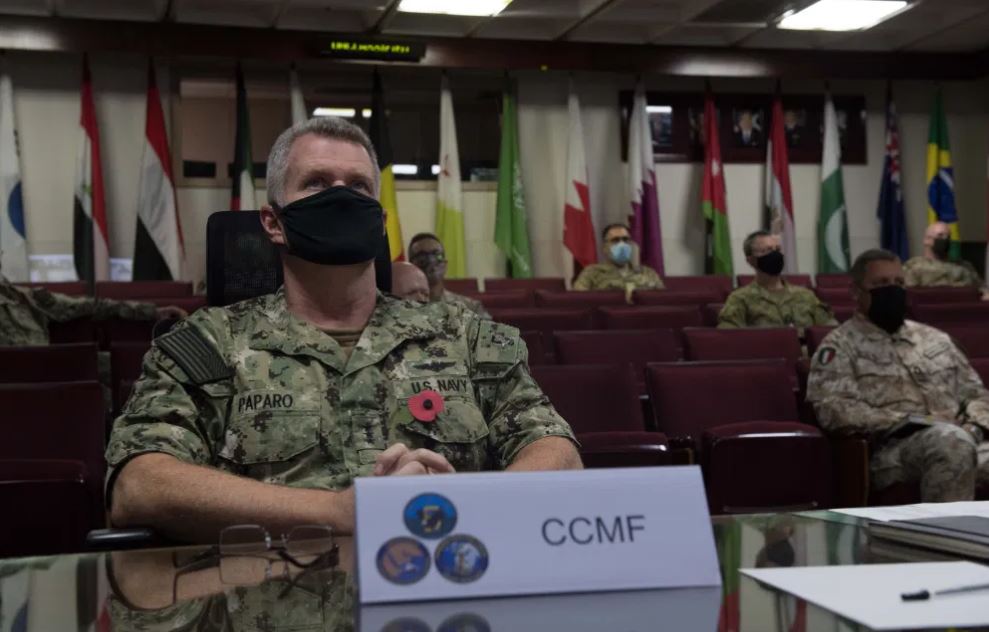 Alongside workshops with members of the maritime trade industry, senior representatives and flag officers from a variety of nations discussed the continuing importance of the CMF and EU NAVFOR partnership as a means of ensuring the maintenance of security and a commitment to deterring illicit activities in the region.

Rear Admiral Corrado Campana, Deputy Commander EU NAVFOR thanked all the organisations that contributed to the 47th SHADE Conference. “Due to the COVID-19 pandemic it was the first “virtual” SHADE conference. The importance of this forum was reinforced by the breadth of different subjects addressed during the two days of this Conference in both the Working Groups and the Plenary. We must continue to invest in sustaining the dialogue on piracy and maritime security that is so critical to continued confidence in the freedom of navigation in this important region.”

The importance of expanding information sharing efforts, regional capacity building, wider coordination and the existing close working relationship between CMF and EU NAVFOR will guarantee the most effective use of assets and improve maritime security in this critical maritime region.

Established in 2001, CMF comprises 33 member nations united by their desire to maintain maritime security by countering non-state actors who use the maritime environment to conduct illegal acts such as narcotics smuggling and piracy. CMF recently underlined its success with its largest ever methamphetamine haul removing 450kg of the drug from an unregistered dhow. Vessels operating in support of CMF have also engaged in rescue operations whilst on CMF tasking, including providing water, food and assistance to an Iranian ship which found itself without power or supplies last month.

EU NAVFOR Somalia is an international counter-piracy naval operation with the objective of deterring and disrupting acts of piracy and armed robbery on the high seas, protecting vessels of the World Food Programme (WFP) and other vulnerable shipping.
Source: Combined Maritime Forces (CMF)