On 30 August 2022 the US Maritime Administration (MARAD) issued a revised advisory (2022-08) to US flagged commercial vessels operating in the Persian Gulf, Strait of Hormuz, Gulf of Oman, Arabian Sea, Gulf of Aden, Bab el-Mandeb Strait, Red Sea, and Western Indian Ocean. The advisory warns that regional conflict, heightened military activity, and increased political tensions continue to pose threats to merchant vessels operating in these geographical areas. It further states that threats may come from a number of different sources including, but not limited to, drones (unmanned aerial vehicles (UAVs)), limpet mines, explosive boats, and pirates and armed robbers. With little or no warning, vessels operating in these areas may also encounter navigation or communication disruptions, such as GPS interference, AIS spoofing, and bridge-to-bridge communications spoofing.

So far, MARAD has not published any maritime alerts for the Red Sea, Persian Gulf, and Western Indian Ocean region in 2022. In 2021 however, it notified the industry of seven security incidents involving merchant vessels operating in these areas. One of the alerts described a mine placed on a vessel’s hull while operating in the Persian Gulf. Other alerts referred to incidences of explosions, one occurring near a vessel’s waterline while transiting the Gulf of Oman and two occurring onboard vessels underway in the Arabian Sea. And while MARAD recognizes that some of the vessels involved may have been targeted specifically due to their association with certain countries, individuals, or companies, it also emphasizes that the potential remains for miscalculation or misidentification that could lead to aggressive actions against “non-associated” vessels. It further underlines that the conflict in Yemen continues to pose a direct or collateral risk to vessels transiting the Red Sea, Bab el-Mandeb and Gulf of Aden, and that piracy poses a threat in the Gulf of Aden, Western Arabian Sea, and Western Indian Ocean. 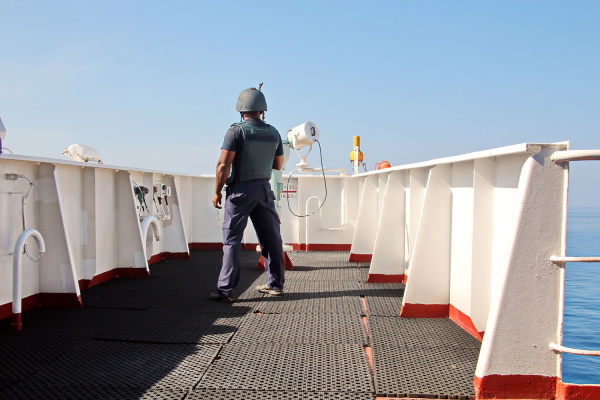 MARAD recommends vessels operating in this area to review their security measures, ensure their AIS is transmitting at all times (except in extraordinary circumstances, consistent with the provisions of SOLAS), and monitor VHF Channel 16. Furthermore, the following guidance is provided:

• Conduct a pre-voyage risk assessment and incorporate appropriate protective measures into their vessel security plans.
• Take advice from available industry guidances, such as the
o Best Management Practices to Deter Piracy and Enhance Maritime Security in the Red Sea, Gulf of Aden, Indian Ocean and Arabian Sea (BMP5),
o Recommended risk mitigating measures published by BIMCO, ICS, Intertanko, Intercargo and OCIMF in January 2021, and
o Bridge Reference Cards produced by the International Maritime Security Construct (IMSC).
• Maintain a vigilant lookout at all times, particularly when at anchor, operating in restricted maneuvering environments, or proceeding at slow speeds. Pay attention to the vessel’s waterline and look for suspicious activity such as approaching swimmers or small boats.
• Avoid entering or loitering near Yemen’s ports, and exercise increased caution if entering Yemen’s territorial waters or Saudi territorial waters in the Red Sea.
• Establish and remain in contact with the United Kingdom Maritime Trade Office (UKMTO) as per BMP5. Immediately report any incident or suspicious activity.
• Answer all VHF calls from coalition navies

Like MARAD, the IMB Piracy Reporting Centre (PRC) encourages Masters and shipowners to adhere to the recommendations in the latest BMP5 and emphasises the importance of maintaining a 24-hour visual and radar watch. An early sighting/detection of an approaching skiff will enable an accurate assessment, allowing the Master and any privately contracted armed security personnel (PCASP) to make informed decisions to keep clear of small boats, dhows, fishing vessels and if necessary, take evasive actions and request assistance as needed. The IMB PRC reminds Masters that fishermen in this region may try to protect their nets by attempting to aggressively approach merchant vessels and some of the fishermen may be armed to protect their catch. They should not be confused with pirates.

Removal of the Indian Ocean High Risk Area
Ship operators and masters are likely aware of the industry’s decision to remove the Indian Ocean High Risk Area (HRA) for piracy as of 1 January 2023. However, threat and risk assessments should still be conducted also after this date, and best management practices followed to continue to mitigate the risks presented by remaining security threats in the region. Furthermore, the Voluntary Reporting Area (VRA) administered by the United Kingdom Maritime Trade Operations (UKMTO) has not changed. Ships entering the VRA are encouraged to continue to report to the UKMTO and register with the Maritime Security Centre for the Horn of Africa (MSCHOA) in accordance with the BMP5.
Source: Gard, https://www.gard.no/web/articles?documentId=34287407