IMO’s Carbon Intensity Indicator (CII) rating system for vessels is coming into force next year. It will be used to assess the efficiency with which a ship operates in terms of its CO2 emissions. The CII regulation is likely to alter the traditional division of responsibilities between owners and time charterers, and may significantly change the way vessels are operated.

An initial step in the journey is to understand the challenges ahead in order for owners and charterers to work cooperatively to meet them. In this article we look at some of the key features of the CII regulation. Our accompanying article “Under the lens – BIMCO’s CII clause for time charterparties” parses the newly released clause that intends to help owners and charterers contractually navigate and collaborate on compliance with CII as an operational measure.

The Carbon Intensity Indicator or CII is a rating system developed by IMO for all cargo, Ro-pax and cruise vessels above 5,000 GT whereby vessels will be rated for their operational Carbon Intensity for each calendar year, starting in 2023. Operational carbon intensity performance of different types of ships from 2019 will be used as a reference. Below are some key points of the CII regulations. 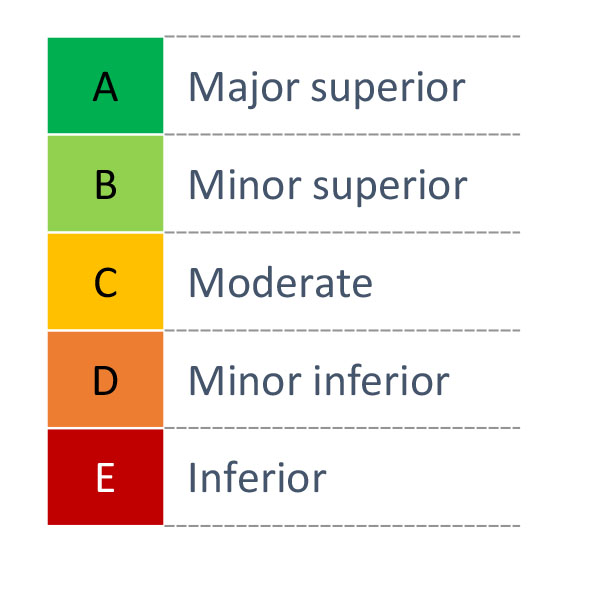 To understand which factors can impact carbon intensity of a vessel, we need to look at the simplified formula for CII. It is derived from the annual efficiency ratio (AER), i.e. it is based on vessel’s deadweight as opposed to the actual cargo carried. If it was the latter, then the metric would have been EEOI (Energy Efficiency Operational Indicator).

As the formula stands currently, calculation of carbon intensity is based on the consumption of fuel and its fixed carbon factor, and not on direct measurements of the emissions at the engine exhaust side. Also, there is no benefit given for carbon capture onboard. A lower numerator and/or a greater denominator can result in lower carbon intensity. Focussing on the numerator first, the following factors can have a positive impact on the CII rating for a given calendar year:

We explain this using a worked example of two sister ships, ‘Vessel 1’ and ‘Vessel 2’. The CII calculations for these two ships are shown below.

As is apparent from the above example, two identical ships can have different CII ratings. ‘Vessel 1’ had a better rating in this case and there can be many reasons for this, some of which we mention below. For ease of simplicity, we have tried to show them in relation to the formula for CII. We have also indicated which stakeholder is more likely to have a greater control over the relevant factor impacting CII. 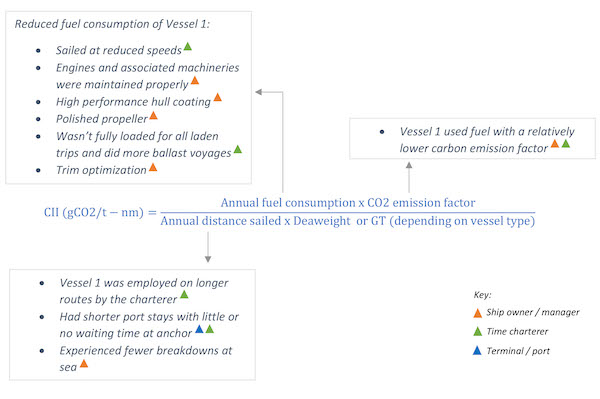