Please read the below description of an incident. Keeping your company’s standards and vessel procedures in mind while reading to compare with the actions of the crew below. We will discuss the factors which led to the incident occurring and how to avoid it happening on our vessel.

Vessel had bunkered a few thousand tons of VLSFO at its last port. A few days after departure, analysis results were sent to the vessel by the testing laboratory and the fuel seemed to be on spec for all ISO 8217, table 2 parameters except for Total Sediment Potential (TSP). The result for TSP was 0.15% whereas the maximum limit in table 2 was 0.10%. The vessel operator’s technical department advised the vessel to consume this batch of bunkers and report any operational difficulties faced. Some technical guidelines on operational adjustments to be made were also given to the crew. Within hours of starting to consume the new batch of bunkers, the vessel experienced excessive purifier sludging.

Charterers were informed and they agreed to test the ‘vessel’ sample whose seal number was mentioned in the Bunker Delivery Note (BDN). Owners did not see any reason to object as they thought the samples were taken at the receiving ship’s manifold. The vessel was instructed to land the sample at the next port. The Master acknowledged the message and asked the office in return if the vessel should also land its own samples at the same time since the samples mentioned in the BDN were taken at the bunker barge’s manifold and not their own ship. Owners informed charterers of this as they were now concerned that the samples from bunker barge may not be representative of the fuel bunkered.

Charterers expressed their dissatisfaction as the information provided on the BDN did not reflect what the crew or the owners were saying. Charterers independently went ahead with the testing of the ‘vessel’ sample mentioned in the BDN. The result for TSP was 0.10% and therefore on spec. Under the charterparty, this test result was binding on owners. 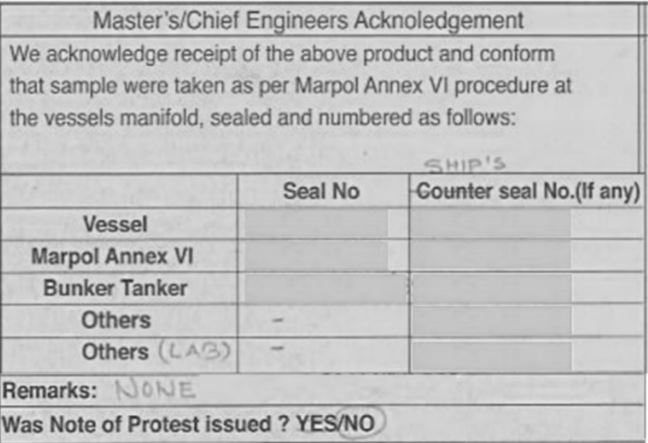 To avoid a repeat of this incident, owners investigated the practice of signing BDNs across their fleet. The main findings from their investigation were:
• During the pre-bunker meeting with the bunker barge representatives, the sampling protocols were not discussed.
• It was common practice for Masters and Chief Engineers to sign BDNs without verifying the information entered therein.
• No fleet vessel had ever issued a protest to the bunker barge for such practices, or refused to sign the BDN, or informed the owners or charterers.
• The majority of crew assigned bunkering related duties were not aware that they had to oversee and continuously monitor the sampling procedures adopted by the barge in order to ensure the sample is truly representative.
• The crew did not fully understand the repercussions of signing such BDNs as no formal training had been provided by the shore management.
• The company’s SMS did not clearly highlight how the vessel should act where the bunker barge refuses to enter the seal numbers of the samples taken at the receiving ship’s manifold on the BDN.

HOW TO IMPROVE BY LESSONS LEARNT
Based on the case and the keywords, you should now perform an onboard risk assessment of the incident and the factors which led to it. Bear in mind your vessel’s procedures. You can also discuss the keywords below in order to determine onboard areas/topics for increased awareness:
• Where can procedures for following be found in our Company’s SMS:
o action to take when the bunker barge refuses to enter the seal numbers of the vessel’s samples on the BDN; and
o monitoring the sampling procedure implemented by the bunker barge Discussion centered on these procedures is recommended.
• Is there a standard note of protest in the SMS which Masters or Chief Engineers can use in such circumstances?
• Try recalling your previous bunkering experience in different ports with regards to acceptance of ship’s samples by the bunker barge. Discuss your experiences.
• Discuss the risks where the crew is unable to or does not monitor the sampling procedure adopted by the bunker barge and later accept barge’s samples as being representative of the fuel bunkered.
Source: Gard (http://www.gard.no/Content/30377990/Case_study_Importance_of_checking_BDN_before_signing.pdf)