The IMO considers exhaust gas scrubbers to be an acceptable means of reducing vessels’ sulphur emissions and ensuring compliance with MARPOL Annex VI. A separate guideline, Resolution MEPC.259(68), specifies the requirements for the verification, testing, survey and certification of scrubber systems and sets out the criteria for discharging scrubber washwater into the sea. 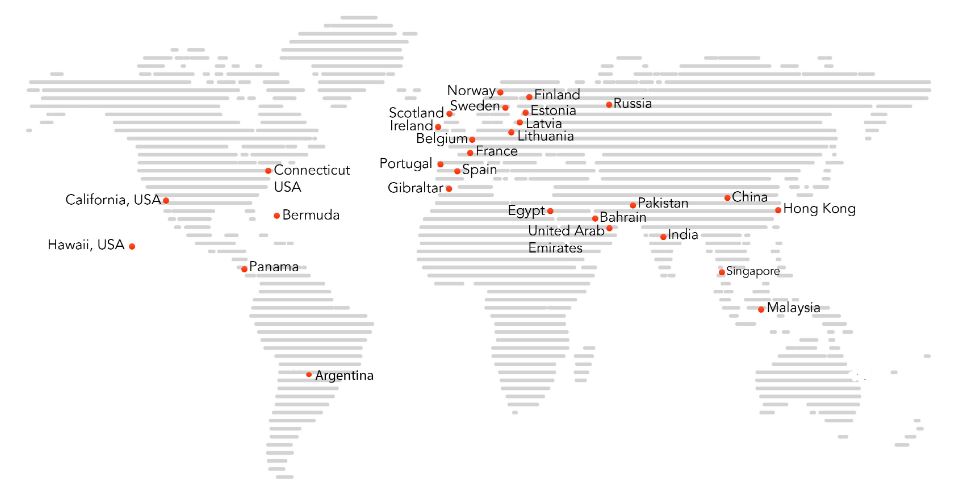 However, some coastal states and ports have implemented local regulations with more stringent requirements that restrict or completely prohibit the discharge of washwater from open loop scrubbers or prohibit the use of scrubbers. We are currently aware of the following regions/states/ports with local regulations that have an effect on the discharge of exhaust gas scrubber washwater, although the list should not be considered as complete.

Discharge of washwater from open loop scrubbers is prohibited in the Suez Canal. The attached clarification to circular 08/2019 also states that Egypt is in the process of ratifying MARPOL Annex VI. It should be mentioned that though use of fuel with a sulphur content greater than 0.5% sulphur may be allowed without the use of scrubbers, vessels should always refer to their flag state regulations which may not allow this.

We have been informed that although Argentina has not ratified MARPOL Annex VI, the authorities have nonetheless prohibited discharge of wash water from open loop scrubbers in country’s jurisdictional waters following the enactment of Disposition 15/2020 which came into effect on 10 August 2020.

Use of open loop scrubbers is not permitted. Environmental Policy for Ships states: “Washwater and residue from the EGCS shall be not disposed of in Bermuda or discharged into Bermuda’s waters but shall be stored on board the ship until outside of Bermuda’s waters”. If a vessel has to use closed loop scrubber in territorial waters of Bermuda, permission needs to be sought from the authorities.

Notice to Shipping No. 01 of 2020 states that discharging EGCS washwater into bodies of water under the responsibility of Panama Canal is not permitted. Use of closed loop systems is permitted.

Hawaii: Conditional section 401 WQC (Water Quality Certification) as mentioned in section 6.7 of 2013 VGP allows for discharge of washwater subject to certain requirements being fulfilled. These requirements can be found in the same section.

Connecticut: Connecticut has laid down specific conditions as part of the 2013 Vessel General Permit (VGP) requirements. In accordance with section 6.5.9 of the 2013 VGP, discharge of exhaust gas scrubber washwater into Connecticut waters from any vessel covered under the VGP is prohibited. Please see CGS section 22a-427, and Connecticut Water Quality Standards (CT WQS).

US Coast Guard has informed that it will use the IMO’s Global Integrated Shipping Information System (GISIS) database to confirm that foreign flagged ships are using approved scrubbers. Notification to IMO’s GISIS shall be submitted by the Flag State of the vessel. The USCG has also published a guidance document on enforcement of the sulphur cap regulations.

According to marine notice PMA/03/2019, discharge of washwater from open loop scrubbers is prohibited within port limits including anchorage area(s). The circular also states that vessels should obtain a permit from the Marine Safety & Environment Protection Directorate before discharging washwater anywhere in Bahrain waters.

China MSA in its “Implementation Scheme of 2020 Global Marine Fuel Oil Sulphur Cap” has mentioned that washwater discharge from open loop scrubbers is prohibited in domestic emission control areas, which includes coastal control areas and inland river control areas. Members can refer to a circular by Huatai to know the coordinates of these areas. In another circular, Huatai set out the inspection procedure which may be adopted by the authorities on ships installed with scrubbers.

In DG Engineering Circular 02 of 2019, India appear to indicate that scrubber washwater discharges are allowed if the criteria set out in MEPC.259(68) are met. However, this is qualified with a requirement that local regulations should also be followed. As of now, it is not clear if local restrictions will be imposed in some areas

In circular MSN 07/2019 Marine Department of Malaysia has indicated that discharge from open loop scrubbers is prohibited within the countries waters (12 nm from nearest land). They have also issued MSN 08/2019 to clarify that the regulation does not apply to ships transiting the Malacca and Singapore straits.

In their circular no. 001/2020, the Ministry of Maritime Affairs has prohibited the discharge of washwater from open loop scrubbers in Pakistani port waters. The circular advises vessels to either change over to closed loop mode of operation or switch to compliant fuel well in advance of the vessel’s arrival in port waters.

According to the Maritime and Port Authority of Singapore (MPA), discharge is prohibited in Singapore port waters from 1 January 2020. This has been done to maintain Singapore Port’s marine water quality standard. The prohibition does not apply to ships transiting the Traffic Separation Scheme (TSS) without calling into the Port of Singapore. MPA has published useful guidance on IMO’s 2020 Sulphur limits which can be accessed here. The document advises ships fitted with open loop scrubbers to ‘carry out the switch to either closed-loop mode or to compliant fuel well in advance of the vessel’s arrival at the port waters’. Residues from scrubbers have been classified as toxic industrial waste under Singapore’s Environmental Public Health (Toxic Industrial Waste) Regulations. It can only be collected by licensed Toxic Industrial Waste Collectors.

Abu Dhabi: In 2013 Abu Dhabi authorities issued ‘Vessel Discharge and Maintenance Guidelines For Owners, Masters And Agents’. It was amended in 2018 and states that scrubber washwater can be discharged in port waters if free from pollutants whilst scrubber sludge should be discharged from the vessel to an Abu Dhabi Ports Company (ADPC) licensed waste disposal contractor.

Fujairah: As per notice to mariners no. 252, Harbour Master of Fujairah has announced that use of open loop scrubbers will be banned in port waters. The circular can be found here.

As per circular no.4 by Estonian Maritime Administration, use of open loop scrubbers is allowed if the owner can demonstrate that the washwater meets IMO’s requirements. However, port authorization is required if scrubber washwater is discharged in port area.

Our local correspondent reports that Finnish legislation does not impose any restrictions on the use of open loop scrubbers, however ports can make their own rules. Neste Porvoo Harbour is currently the only port in Finland where washwater discharge from open loop scrubbers is prohibited.

Our correspondent informs us that there are restrictions in place on the use of open loop scrubbers in Port Jérôme-sur-Seine, Seine, Le Havre, Montoir, Nantes Saint-Nazaire and Bordeaux

Discharge is not allowed in inland waterways and the Rhine, pursuant to Articles 1 and 3 of the CDNI Convention (Convention on the Collection, Deposit and Reception of Waste Produced during Navigation on the Rhine and Inland Waterways).

We have been informed by our correspondent that open loop scrubbers are temporarily not permitted as a precautionary measure until the Gibraltar Government arrives at a definitive policy decision on this issue.

Dublin: The Irish authorities’ Notice No. 37 of 2018 ‘Prohibition on the Discharge of Exhaust Gas Scrubber Wash Water’ stipulates that discharge of washwater is prohibited in waters under Dublin port jurisdiction. Dublin port jurisdiction includes waters from the Matt Talbot Memorial Bridge eastwards to a line from the Baily Lighthouse through the North and South Burford buoys and through Sorrento Point.

Waterford: As per Port of Waterford’s marine notice ‘Prohibition on the Discharge of Exhaust Gas Scrubber Wash Water’, discharge of scrubber washwater is prohibited in port limits from the start of January 2019.

Cork: Port notice No. 15 of 2018 states that given the potential for impact on sensitive ecosystems, and the abundance of Natura 2000 sites within the jurisdiction of the port company, discharge of scrubber washwater is prohibited in port waters.

The authorities are currently studying the impact of scrubber washwater on the marine environment and will provide its conclusions upon completion of the study. Meanwhile, the current position seems to be that discharge is not allowed in port waters, according to port rules and conditions of use approved by the Ministry of Transport. Reference is made to the European Commission’s 2016 note on discharge of scrubber washwater.

Under the amendments of 1 March 2019 to Regulation No.488 on the environmental safety of ships and mobile offshore units, use of open loop scrubbers is prohibited in the Norwegian fjords. Also, for ships using closed or hybrid type scrubbers, a device for reducing visible emissions to air is required.

According to our local correspondent, local laws prohibit the discharge into port waters any harmful waters or waste substances, as well as any other substances or residues that may in any way pollute the waters, beaches or shores, such as scrubber washwater.

According to our correspondent, discharge of washwater from open loop scrubbers is prohibited in St. Petersburg and Primorsk. This is based on the requirements laid down in “General Rules of navigation and mooring of vessels in and on approaches to seaports of the Russian Federation” which restricts the discharge of any contaminated water in port. However there is no official notice published by authorities as yet.

According to Notice to Mariners No. 45 of 2019, use of open loop scrubbers is prohibited in the ports on the Forth and Tay. The Notice states that this measure is being implemented since there has been no confirmation at a National level in Scotland that the constituent parts of the washwater discharge has no impact on the Marine environment and in particular the effect on the local ecosystems within the Forth and Tay.

Our correspondent informs us that Harbour Master of Port of Algeciras has confirmed there is a prohibition on discharge of washwater from open loop scrubbers in port waters.

Port of Brofjorden does not allow the use of open loop scrubbers. Our correspondent informs us that port regulations will be updated to reflect this.

Although exhaust gas scrubbers are an accepted abatement technology to meet IMO’s SOx emission rules for 2020, their use is not accepted globally in all states. If a members’ vessel is trading in area(s) where the discharge of scrubber washwater is not permitted, vessel operators have two options to choose from to ensure compliance with the sulphur limits:

• switch over to closed loop mode of scrubber operation, in which case it will be necessary to convert currently installed open loop scrubber systems to closed loop or hybrid systems, if not already done; or
• changeover to compliant fuel.

Any changeover should be carried out well in advance of the vessel entering the areas with prohibition or restrictions in place, and proper records should be maintained of such changeover. Early changeover will help in identifying operational issues, if any, after the changeover, and will allow for sufficient time to rectify such before the vessel enters the area.Owners’ and managers’ safety management procedures should contain guidelines on how to carry out the changeover safely and outline the recordkeeping requirements. It is also recommended that a vessel’s passage plan incorporates information on when to carry out the changeover, taking into account things such as duration of passage, time needed for changeover, density of traffic, proximity to hazards etc.

We advise Members and clients to monitor the situation closely and ensure that crew members onboard vessels fitted with open loop scrubbers are made aware of any relevant local discharge requirements in force. In general, vessels with any kind of scrubber installed should check with local authorities whether there are any applicable regulations in relation to the use of scrubbers, such as washwater discharge restrictions, and requirements to seek permission from authorities to use scrubbers.
Source: Gard (http://www.gard.no/web/updates/content/26939066/beware-of-local-restrictions-before-discharging-washwater-from-exhaust-gas-scrubbing)