Home
»
Breaking News
»
We have finally seen some stability in bunker prices, but there is still a lot happening out there…

Following on from our earlier Integr8 notes on developments in bunker prices, oil prices and the supply/demand fundamentals behind the oil industry, here we give an update on bunker pricing and some of the possible next moves in the market.

After the extreme turmoil in the market in the first half of this year, we have just seen a 6-week period of relative calm. Oil prices have generally stabilized, with Brent just above $40/bbl and VLSFO in the $300-330/ton range (in Singapore), as seen in Fig 1. We are in that phase where oil demand is recovering, but there is no straight line out of this, and at the same time the OPEC+ group have successfully made huge reductions in oil production. These factors have lifted prices from their end-April lows and meant we have seen these past 6 weeks of near consistent pricing. 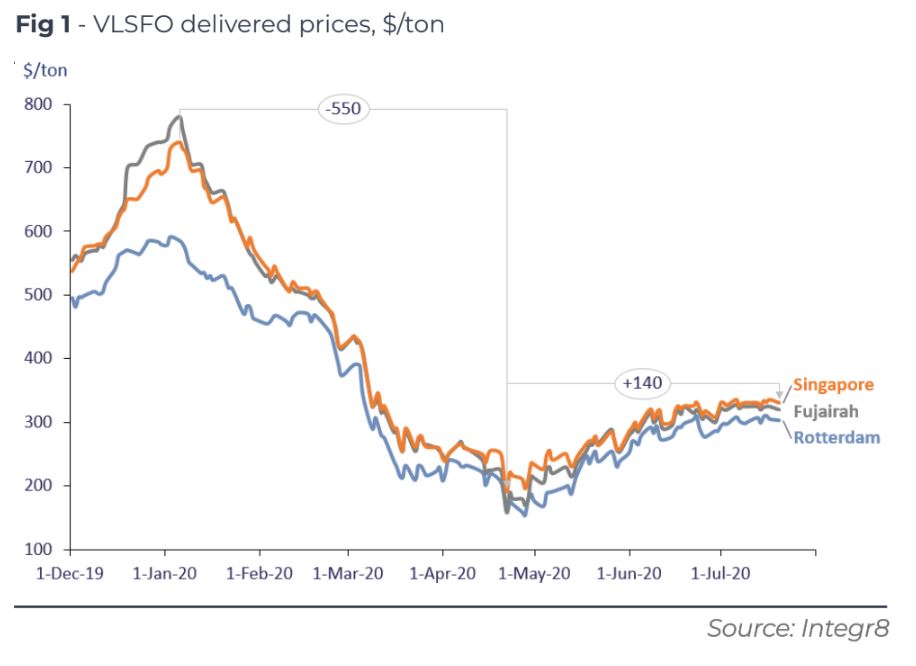 But this is by no means the end of the road. As we have outlined in previous notes, the overall oil supply/demand fundamentals will have the biggest bearing on prices in our markets and there is still a lot of uncertainty here. Total oil demand is rising, and this will push prices higher, but it’s a ‘bumpy road’ and it seems we are in for more localized or regional lockdowns in many countries. Clearly the US, as the biggest consumer, will create the biggest headlines and is likely to have the biggest impact on price movements, either up or down.
Other factors putting an upwards spin on prices are the indications of successful vaccines being developed and the huge government and EU stimulus programs being put in place. Any combination of higher oil demand and any/all of these other factors will push oil prices above the low $40s we have seen for Brent in the past 6 weeks.

VLSFO and HSFO dynamics
The other side of the equation is oil supply. We have seen major OPEC+ production cutbacks, originally announced for May/June and then extended into July, but these are coming to an end and there is every indication that the group will increase output by around 2 million b/d from the 1st August. However, this is not a surprise and is largely already factored into current/futures prices. As long as Saudi Arabia and Russia appear to be co-operating, oil prices are likely to be supported.

Watching these oil demand and covid-19 factors, along with OPEC+ developments, will give the key indications for absolute oil prices. However, what is happening with oil demand is likely to have the biggest influence and this is most immediately visible through oil stocks data; this is why the US weekly oil stock levels are watched so closely and have so much price influence.

Over-and-above these key developments in absolute oil prices, there will be specific issues that will have a further impact on our market and bunker prices. The relative price for VLSFO against crude has moved to extremes. At the start of the year there was a huge VLSFO premium as IMO 2020 kicked-in, and it was trading up to 45% above crude (Brent). As the VLSFO market settled, this relationship eased to 110% of crude in late February. The enormous volatility in March and April stemmed from the impact of covid-19 and the very weak position of crude, with a brief interlude in early April as crude strengthened temporarily ahead of Saudi Arabia and Russia finding an agreement to cut production from May 1st. It has been since these production cutbacks took place in May that crude has strengthened to the point where for the past 6 weeks VLSFO pricing relative to crude has been very low, at only 102%, as shown in Fig 2. 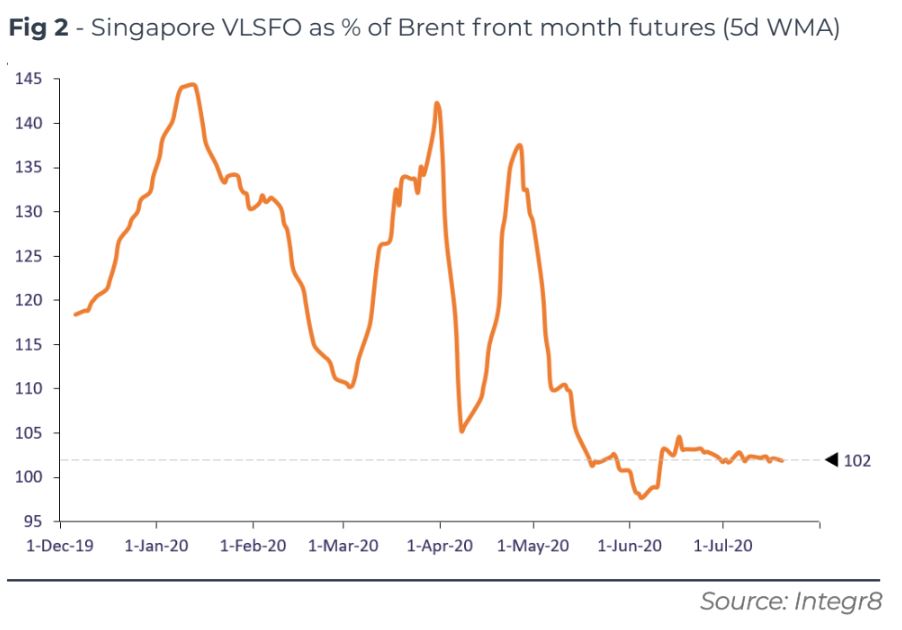 The nature of VLSFO typically as a blend means that as demand for gasoil/diesel, jet and gasoline increases, so the price of these products relative to crude will rise and this will also ‘pull-up’ the relative price of VLSFO to crude. So as oil demand increases and crude prices move higher, we could expect VLSFO prices to increase by even more, not back to the 130% plus levels to Brent, but certainly higher than the present 102%.

These factors that have ‘squeezed’ the relative price of VLSFO to crude are not as apparent in the HSFO market. It is the opposite here, and HSFO prices relative to crude are currently strong; this largely stems from the cutbacks in OPEC+ production, where a high proportion are heavier, high sulphur crudes from the Middle East, and this has meant a subsequent drop in HSFO supply.

This means we have been in a period where VLSFO prices are relatively weak and HSFO prices relatively strong. Hence, the differential between the two bunker products has narrowed considerably over the past few months, to only around $60-70/ton.

Focusing on the next 1-2 months, as some of the OPEC+ cuts are reversed from 1st August, so more heavy, high sulphur crudes will enter the market and the price of HSFO should ease relative to crude. 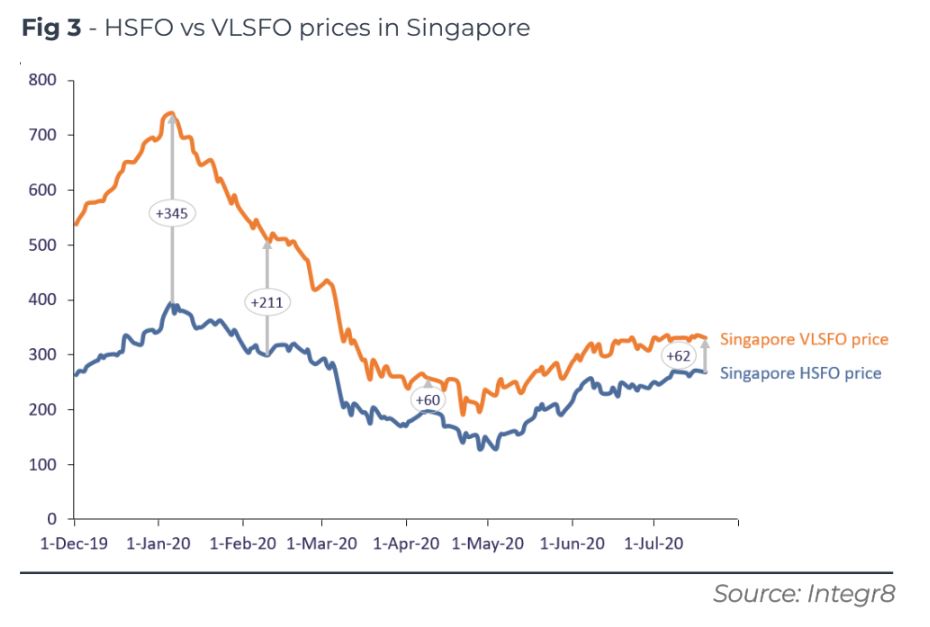 Fig 3 illustrates the HSFO price relationship to VLSFO in Singapore since late last year (the orange line & left axis) and how HSFO has moved from 50-60% of the VLSFO price to more than 80% of the VLSFO price today. As outlined above, the cutbacks in OPEC+ production since 1st May will have supported HSFO prices and the blue line (right axis and inverted from high to low) shows Middle East crude production falling from 24 million b/d in April to only 19 million b/d by June at the same time as HSFO moved from around 55% of VLSFO to just above 80% of VLSFO (Fig 4).

“The VLSFO/ HSFO spread is not going back to the $300 plus seen at the start of the year, but certainly wider than current levels” increase in Middle East production to around 20 million b/d next month is expected to reverse this relationship between VLSFO and HSFO. 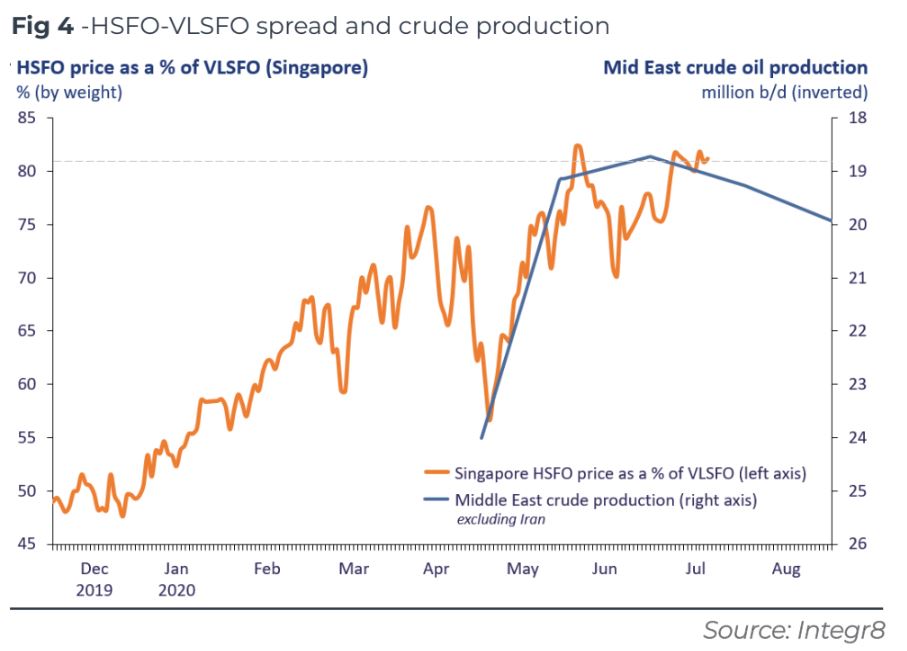 Going forward
So, looking ahead over the short term we could expect this VLSFO/ HSFO differential to widen, as:
1. VLSFO prices rise relative to crude as demand for all transportation fuels increase; and
2. The relative price of HSFO to crude falls with the hike in heavy/ sour crude production from the Middle East (and other OPEC+ countries).
The VLSFO/HSFO spread is not going back to the $300 plus seen at the start of the year, but certainly wider than current levels. The forward curves for this spread are trading at close to $90/ton by the end of this year, and although this is never a forecast, it does illustrate the current market thinking that we are at a low in terms of this VLSFO/HSFO spread.

Analysing the oil fundamentals is important, and we continue to monitor the extent of stronger oil demand and/or OPEC+ production levels, which in-turn will determine the absolute level of prices in the bunker market and also where the VLSFO/HSFO spread goes.
This article has been prepared by, and the opinions expressed are those of, Integr8 Fuels as of the date of writing (the “Materials”) and are subject to change without notice. Integr8 Fuels does not undertake to update or revise the Materials. The Materials are intended to provide general and preliminary information, and is not intended to be relied upon, and must not be read, as financial, legal, business, investment, accounting, tax or other advice or guidance. The Materials are also not addressed to, and do not contemplate, the individual circumstances of any person, including without limitation its financial condition, business environment, investment knowledge and experience, objectives, investment horizon, risk tolerance and preferences. Each person must independently evaluate information contained in the Materials, and form its own opinion and/or seek professional advice, as to the course of conduct most appropriate to it.

The information in the Materials is given in good faith but without guarantee, and notwithstanding anything to the contrary Integr8 Fuels makes no representation as to its accuracy, completeness, authenticity or source. To the fullest extent permitted by applicable law, Integr8 Fuels shall have no liability in contract, tort (including negligence) or otherwise for any direct, indirect, incidental, special, punitive or consequential damages or losses, including but not limited to loss of profits, revenue, business, opportunity, goodwill, reputation or business interruption, that result in any way from the use of content provided in the Materials.
Source: Integr8 Fuels