It is a special vessel, which will leave the port of Emden at about 10 pm this evening. With more than 4,800 new vehicles on board, the SIEM CONFUCIUS is setting out on a three-week voyage to Mexico for the first time. On the way there, it will call at ports in Canada and the USA. It is not the numerous vehicles that make the transport so unique though. The fuel is unusual: The SIEM CONFUCIUS runs on liquid natural gas (LNG), which burns much cleaner than conventional fuels. This is better for the air and better for climate protection. 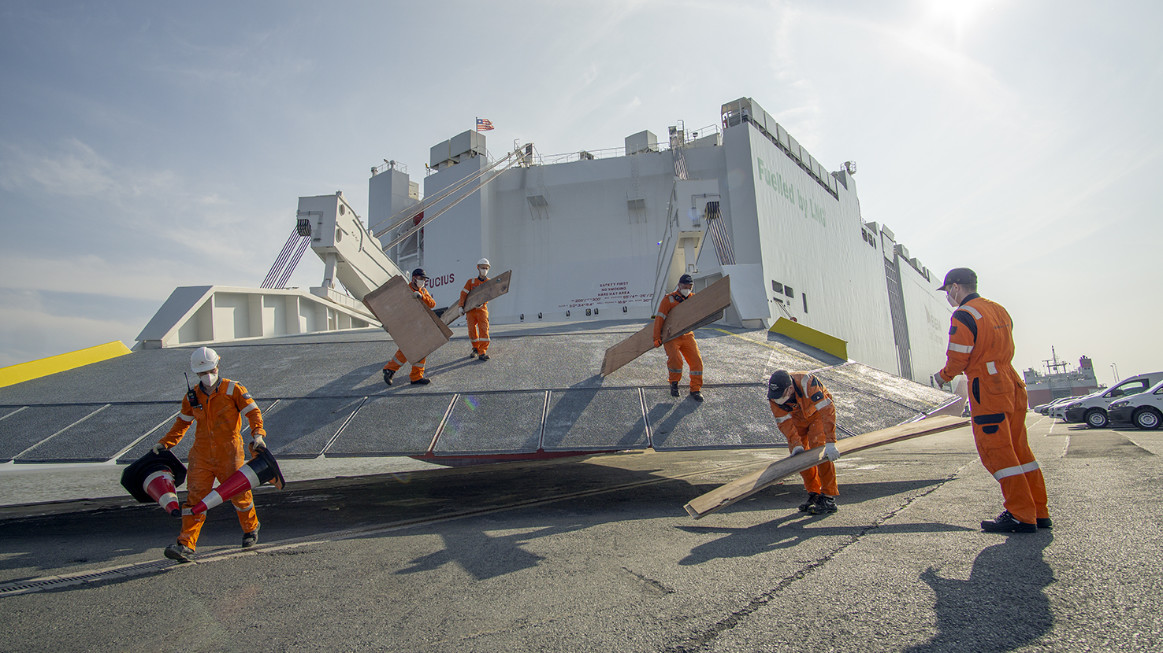 Preparations for the three-week voyage to Mexico

Torben Stadtaus and Dieter Stomberg have been waiting for this moment for a long time. The two nautical experts from Volkswagen Group Logistics are responsible for the trouble-free overseas voyages of the vehicles. They were part of the team that planned the LNG ships from the very beginning. The both know: The SIEM CONFUCIUS not only brings benefits for the environment – it will also work well in practice. “Thanks to its design, the ship, when fully unloaded, has a slightly lower depth than the other deep-sea carriers. This gives more flexibility in using the very limited number of berths in Emden,” says Stadtaus. The freighter is 200 meters long and 38 meters wide with its 13 car decks.

Final preparations for the voyage of the SIEM CONFUCIUS have been underway since the weekend. More than 100 drivers have navigated the new cars onto the decks. Every single vehicle was scanned and secured with the most modern car lashing belts. “Things can get pretty rough on the North Atlantic,” says Stomberg, who was a captain at sea for seven years. The preparation follows a precise plan so that the cars can be unloaded in the right order. With several ports of destination this is a demanding task – but it’s worth it. “After all, we don’t want to have to unload the entire cargo in every port. Time is scarce and lay days are expensive,” says Stomberg.

In addition to the cars, there are 3,600 cubic meters of liquid gas on board – enough for the round trip from Germany to Mexico and back. With the deployment of the SIEM CONFUCIUS and its sister ship SIEM ARISTOTLE, which is expected to embark on its maiden voyage this year, Volkswagen is the first company to use the low-emission LNG drive in overseas car carriers. The environmental advantage: compared with heavy fuel oil, carbon dioxide emissions are reduced by up to 25 percent, nitrogen oxide by up to 30 percent, soot particles by up to 60 percent and sulphur oxide by 100 percent. The ships have been under construction since 2018 for the Siem Car Carriers AS shipping company in China. 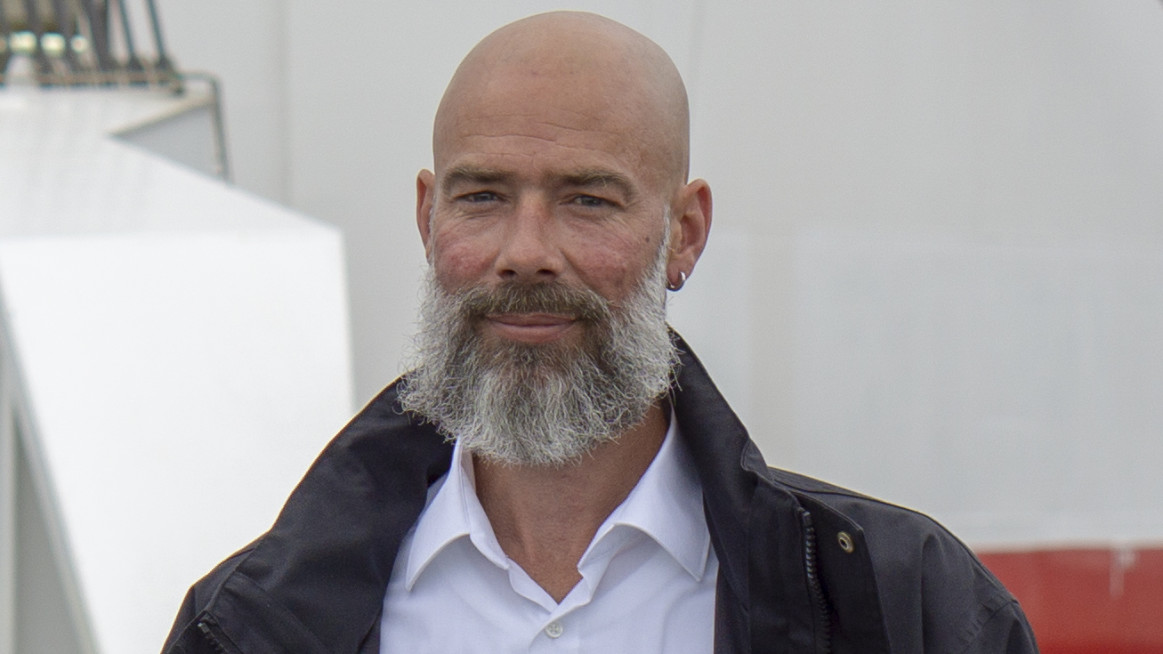 Torben Stadtaus: “Thanks to its design, the ship has a slightly lower depth than the other deep-sea carriers.”

“We are proud to commission the world’s first LNG vehicle transporters of this size. This is an important part of our decarbonization strategy,” emphasizes Thomas Zernechel, Head of Volkswagen Group Logistics. With its “goTOzero” strategy, the company aims to reduce its total CO2 emissions by 30 percent by 2025 and to be CO2-neutral in its balance sheet by 2050. To achieve this, all transportation – by sea, road and rail – must be climate-friendly. “We have to take action now, because ships like the two LNG freighters will be in operation for many years,” says Zernechel.

The SIEM CONFUCIUS and the SIEM ARISTOTLE will operate with low emissions on one of the most important long-haul routes of the Volkswagen Group and replace two conventionally powered freighters on the Atlantic. “Thanks to their duel fuel propulsion, the ships are also future-proof for further developments in regenerative fuels. In the medium term, they could run on biogas or e-gas and thus be virtually CO2-neutral,” says Astrid Mecke, Head of Vehicle Logistics. Before the end of this year, Volkswagen intends to start operating selected short routes in Europe with fuels from regenerative sources.

The crew of the SIEM CONFUCIUS is facing exhausting weeks. They have to keep the freighter in good condition and the 12,600 kW engine running. “It’s a microcosm that has to function constantly. The days will be well filled,” says Stadtaus. At the beginning of July, the ship is expected in Veracruz, Mexico, after stops in Halifax (Canada) and Davisville (USA). “It’s impossible to say exactly to the day in maritime shipping. Changes at short notice are always possible,” says Stomberg. 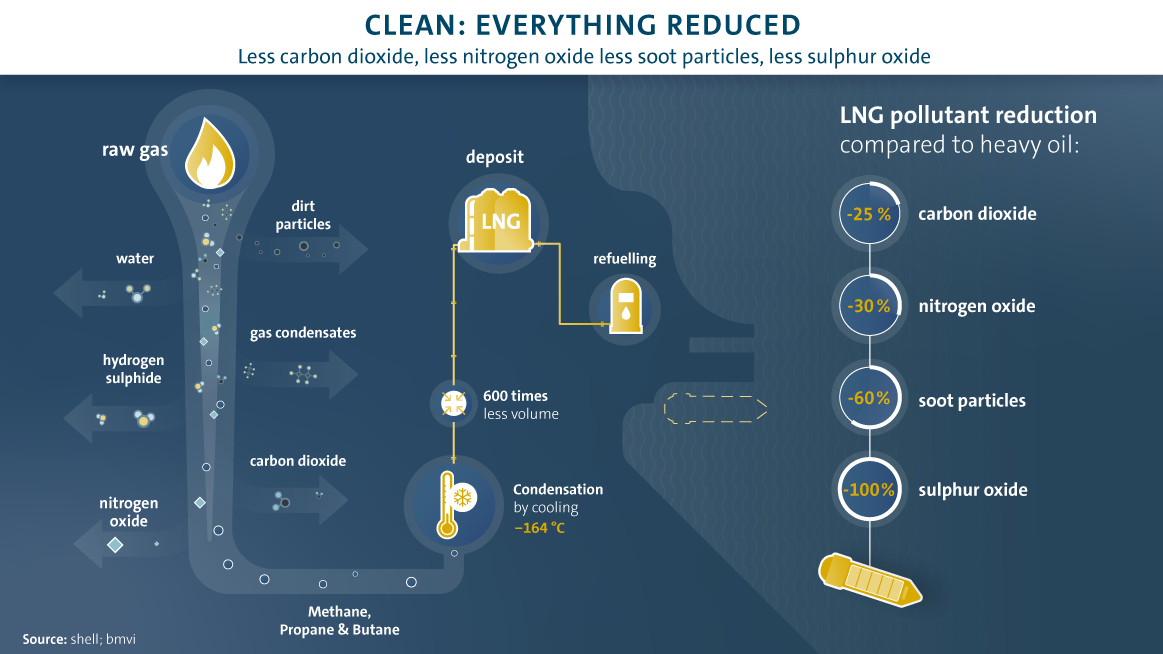 A good three weeks later, the SIEM CONFUCIUS is expected back in Emden after about 12,000 nautical miles and further stops in North America. Torben Stadtaus and Dieter Stomberg will then be back. Together with the Group Logistics team, they will ensure that vehicles arrive on land from the other side of the Atlantic and continue on their way to their destinations. The crew of the freighter will supervise the unloading and loading. Then they will set off on the next big trip. Environmentally friendly.

Volkswagen Group Logistics organizes, coordinates and is responsible for around 7,700 ship departures worldwide every year. Several hundred scheduled ships and eleven car cargo charter ships are on the seas every day for the Group. They are used to ship 2.8 million new cars every year. Added to this are 250,000 container shipments on ships used to transport construction and spare parts.
Source: Volkswagen AG