The US Treasury Department on July 2 removed more Greece-linked shippers and oil tankers from sanctions after promises to end oil trading at Venezuelan ports.

The Union of Greek Shipowners pledged in mid-June to stop commercial activity with Venezuela after oil tankers managed by Greek companies were blacklisted under US sanctions for facilitating the Latin American country’s oil exports. The group promised to halt trade with the country while the Maduro regime was in power.

The US government has issued repeated warnings in the past year that it would crack down on companies and ships helping to facilitate Venezuelan oil exports and therefore fund the Maduro regime, which it views as illegitimate.
Deliveries to Asia

At the time, Treasury said the Delos Voyager loaded 515,000 barrels of Venezuelan crude in mid-January for delivery in February to Qingdao, China, and another cargo of the same size loaded in late March that it delivered to another vessel near Malaysia in mid-May. Romina’s Euroforce tanker loaded 500,000 barrels of Venezuelan crude in mid-March and transferred it to another vessel in the South China Sea in late May, Treasury said.

On June 18, Treasury removed two other Greece-linked shipping companies from sanctions after they ended any ties to Venezuelan oil trade. Shipping companies Afranav Maritime and Seacomber, along with the Athens Voyager and Chios I tankers, were delisted in that action.

The US originally imposed sanctions on Venezuela’s state-owned PDVSA in January 2019, blocking US imports of Venezuelan crude and exports of US diluent to Venezuela.

Venezuelan oil production fell to 550,000 b/d in May, down 70,000 b/d from April, according to the latest S&P Global Platts survey of OPEC production.

S&P Global Platts Analytics expects Venezuelan supply to the global market to be capped at 300,000 b/d through end-2021, given the US sanctions crackdown, Rosneft’s departure and the oil price collapse reducing the appeal of discounted Venezuelan oil. 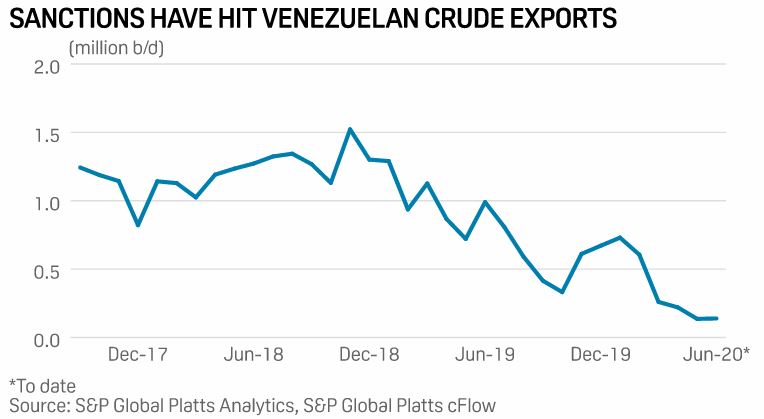