The final vessel in a series of five ship-assist tugs has been successfully converted to Thordon’s RiverTough tailshaft bearings and TG100 shaft seals and has returned to work on the Mississippi River.

These five tugs are considered to be the first ship-assist tugs operating in the lower Mississippi fitted with both RiverTough bearings and TG100 seals.

According to Thordon Bearings’ Sales Manager, Jim Bright, who was involved in all five retrofits, the owner specified the solution because it was tired of unbudgeted costs following frequent premature bearing and shaft wear. The owner was familiar with the reputation of RiverTough bearings and its performance on other workboats. 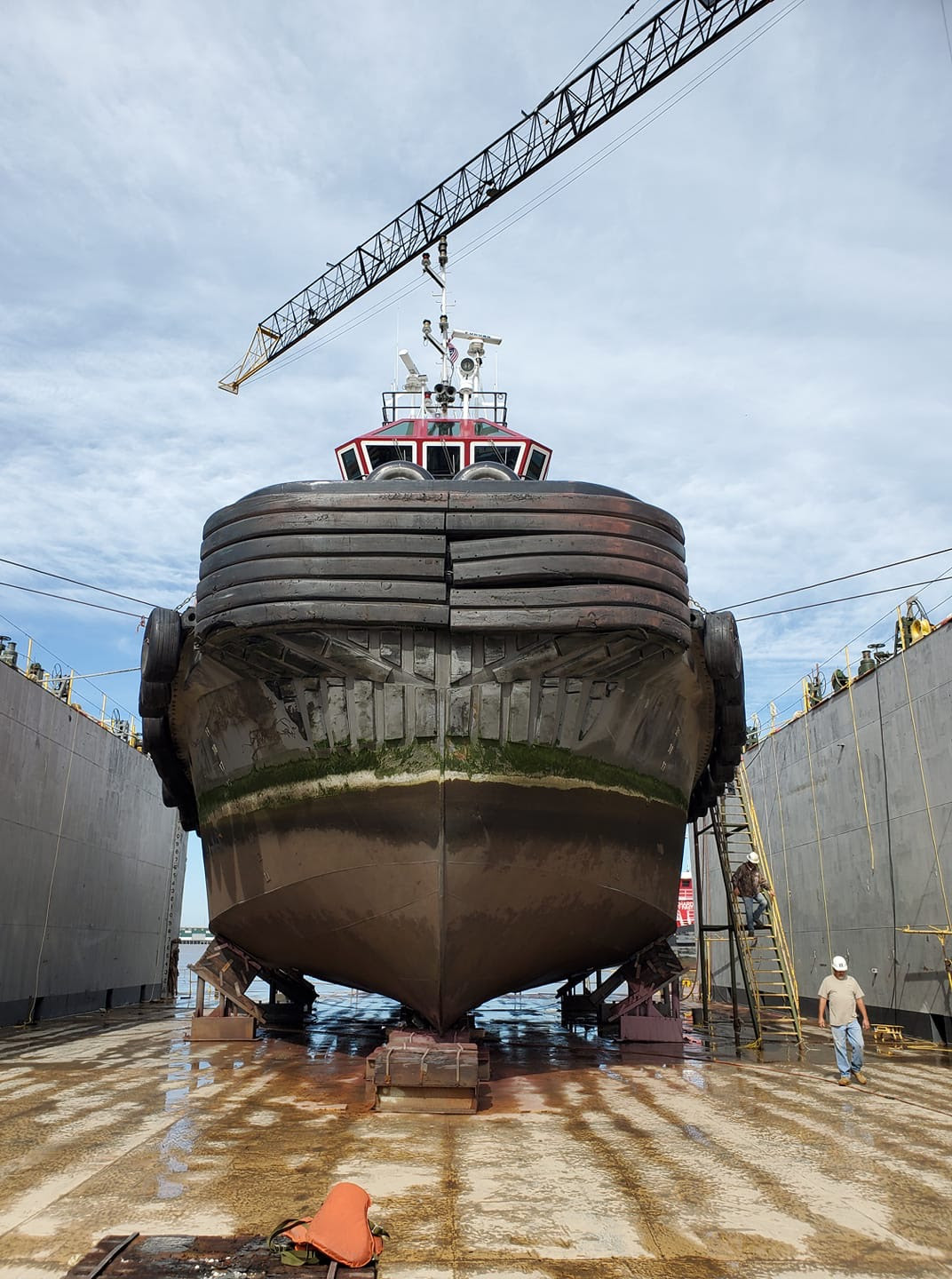 “Their previous arrangements of rubber bearings had to be replaced every two years or so and the shafts needed to be repaired due to excessive wear. This can be avoided with Thordon’s products,” said Bright.

This upgrade was the first ship-assist tug in the New Orleans Port to change over to Thordon.

“We proposed retrofitting the RiverTough tailshaft bearing in conjunction with a ThorSleeve hardened shaft sleeve, and a TG100 shaft seal. This is a much more suitable shafting solution for vessels operating in abrasive rivers like the Mississippi,” Bright stated.

However, during discussions with the owner it emerged that a different installation method was required.

The traditional approach of casting Chockfast© (an epoxy resin) directly to the outside diameter of the bearing meant that the Chockfast resin had to be chiseled out each time the existing rubber bearing needed replacing.

A new rubber bearing would have to be installed every 18-24 months. The bearing would have to be aligned and new Chockfast cast around them. This added to the time that the vessel was docked for repairs which in turn meant additional costs. When you factor the lost charter work into the equation, this process can be very costly for the ship owner.

Thordon’s solution was to create a permanent housing using the Chockfast epoxy grout.

Thordon worked with the shipyard to manufacture a mandrel (a dummy plug) to replicate the outside diameter of the bearing. This was coated with a release agent to prevent the Chockfast from sticking to the bearing. The plug was laser aligned in the strut and then Chockfast was poured around the mandrel. Once it was cured the plug was removed, leaving a perfect housing for the RiverTough bearing. The bearings were then installed in the new Chockfast housing by shrink fitting it with liquid nitrogen. 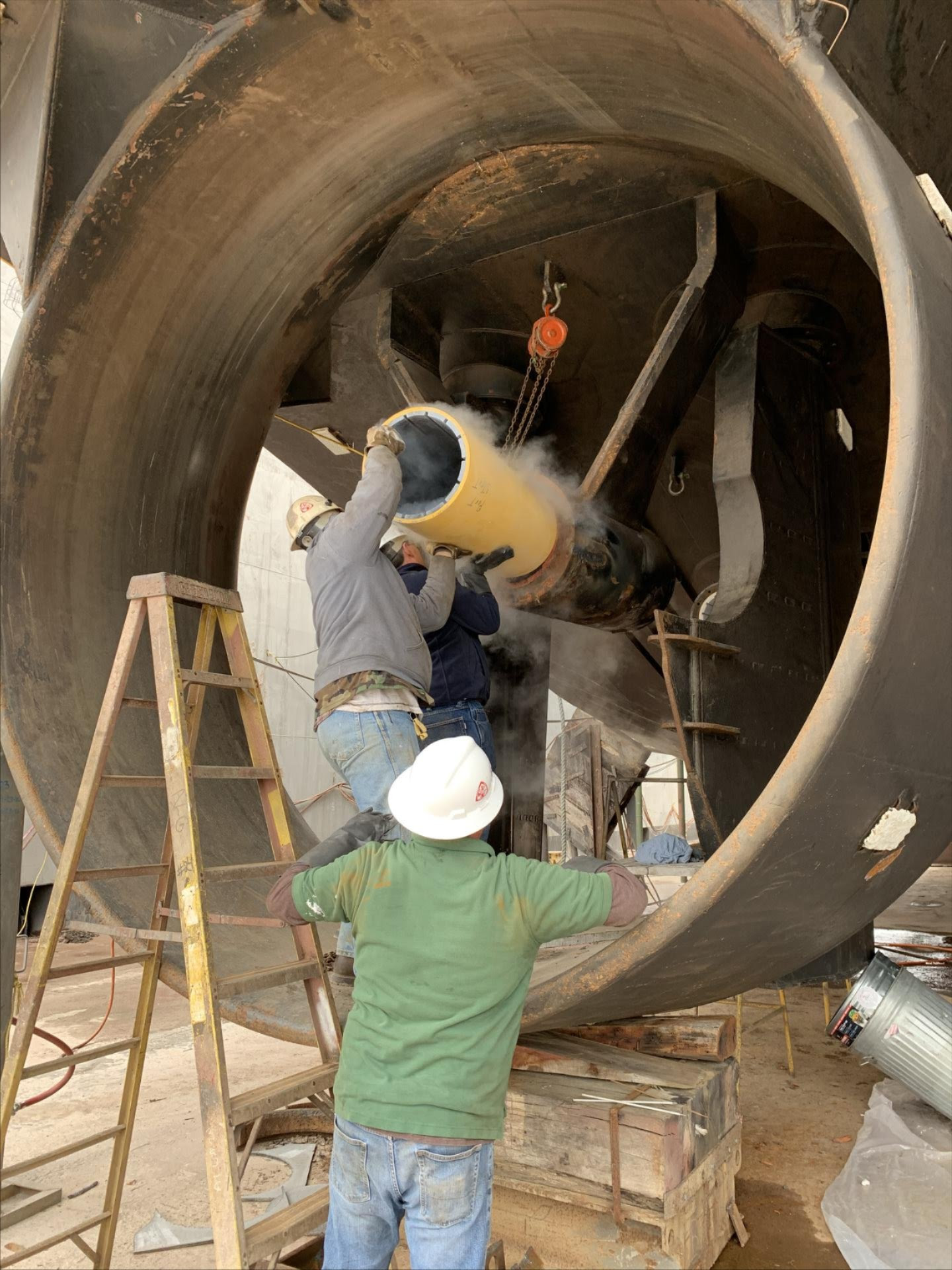 “This method of installation creates a permanent bearing housing that can be reused with a replacement bearing should it be needed without the cost of installing new Chockfast,” said Bright.

The same technique was used on the rest of the vessels in the series.

Bright continued: “These workhorses are now fitted with a technology that routinely outlasts rubber bearings by a factor of two or more. The RiverTough and TG100 solution supplied to this operator reduced installation time and costs, while providing a more simplified process that doesn’t require chipping out and replacing hard-to-remove grout.”

The first tug has been operating with RiverTough bearings and TG100 shaft seals since November 2015 and has gone through at least one docking cycle without having to replace the bearings.

“For this owner, RiverTough has paid for itself and will continue to pay dividends for many years to come,” Bright added.

Thordon Bearings completed the conversion of the fifth and final vessel in the series for the owner in April 2020 and is now carrying out a similar project for a US-based operator of 10,000bbl clean/chemical barges.
Source: Thordon Bearings