With the current focus on alternative marine power sources, it’s easy to overlook the overwhelmingly dominant position of the internal combustion engine, or ICE, in marine propulsion. The marine two-stroke ICE is so well proven and so well established that it will continue to have a central place in ship propulsion for decades to come.

If demands for decarbonization in shipping are to be met, the question then becomes one of fuel: which fuels can be green enough, and available soon enough, to satisfy stricter emissions regulations, and how will engine makers adapt to the new norm of fossil-free fuel?

Chryssakis believes that internal combustion power will be the dominant force in shipping for the next 20–30 years, due both to the development timelines for alternative power solutions and to the time it will take for those solutions to become a force in the marine market.

“In the meantime, if we manage to find good alternative fuels, ICEs can compete,” he says. “The big two-stroke engines are close to efficiency limits, but gains can be made in other energy efficiency technology that will open the way for smaller engines consuming less fuel.”

Kjeld Aabo, Director New Technologies, MAN Energy Solutions, backs up Chryssakis’ claims with numbers: “We have more than 25,000 two-stroke engines operating, and more than 300 orders for alternative fuel engines.” The market for ICEs will be open for many years, he believes. “Right now there is no better power solution for ships of 2,000 dwt and above.”

Finding the right ICE fuels
So what is the right combustion fuel for the future? “That is the big question,” Chryssakis confirms. “It is still open to discussion, but we are learning a lot about some of the more likely options.” While still searching for the right solution, shipping will soon need to achieve critical mass in low-carbon fuels to reach the IMO emissions targets for 2050, he says. These targets stipulate a 50 per cent reduction in greenhouse gas emissions and a 70 per cent reduction in carbon intensity by 2050. “Some of this will be achieved through efficiency measures, but the rest will have to come from alternative fuels.”

The role of DNV GL will be to provide fact-based figures on how much fuel is needed and how it will be produced. “We are now updating our energy transition model based on the latest learning and regulations,” says Chryssakis.

While markets and regulations will dictate price, another key issue is how fuels are produced. “Alternative fuels have to be produced with renewable energy and in a sustainable manner or they will ultimately not help to reduce the overall carbon footprint,” Chryssakis points out. 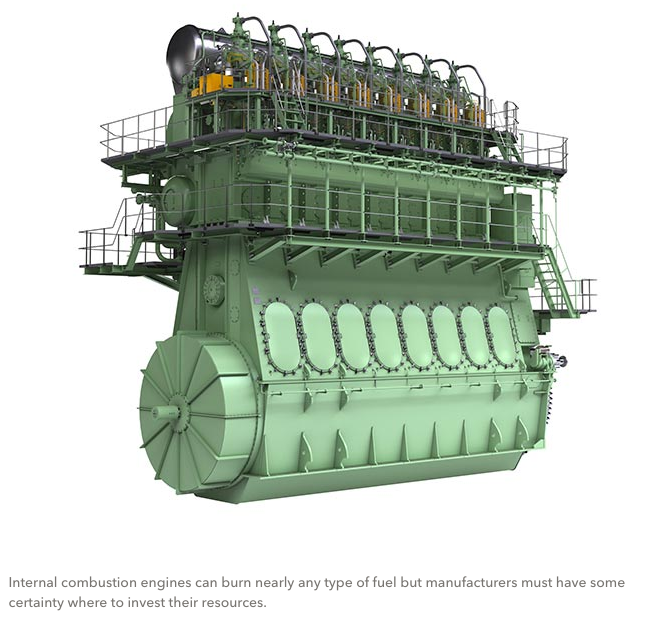 The emergence of ammonia as fuel
Already a familiar industrial commodity, ammonia is one fuel alternative steadily attracting more interest in the industry. “Ammonia is a good way of storing hydrogen, but it has different handling requirements than natural gas,” Chryssakis says. Ammonia takes up less space than hydrogen, but it is both toxic and corrosive. Existing class rules for ammonia as a cargo and as a refrigerant are a good starting point for developing rules for ammonia as a fuel, he says, but emissions still represent a challenge. “The technology required to burn ammonia in an internal combustion engine is still being refined.”

Emissions from combusted ammonia may contain a high amount of nitrous oxide (N2O), a powerful greenhouse gas, even small amounts of which present a risk to the environment. “We might be able to clean this exhaust, but the technology is not proven.” Small amounts of unspent ammonia may also be emitted, Chryssakis says. “Anything over 30 ppm locally can be dangerous, and as little as 5 ppm can be smelled.”

Chryssakis mentions the option of ammonia tankers burning their cargo as fuel, much the same as modern LNG tankers do. But this technology will first gather momentum in newbuilds, he maintains, while regulations and contracts favouring sustainable power will drive retrofits. The cost of producing ammonia will also influence decisions.

“We have a pallet of different fuels already, and ammonia will soon be added to that,” Kjeld Aabo says. MAN plans to offer engines designed to burn green ammonia by 2024, with testing scheduled to begin in 2021. “The goal is no ammonia slip at all. Both odour and N2O should be eliminated with these tests.”

He reports that some owners are asking for ammonia-burning engines before 2024. “These are the carriers of ammonia who can burn their cargo as fuel, but there is also a broader interest out there for ammonia.”

Burning hydrogen in combustion engines is another option, says Chryssakis. And though hydrogen contains no carbon atoms, and thus emits no CO2 when consumed, it is often produced using natural gas. Hydrogen can be used to partly replace LNG in combustion engines, thereby reducing their carbon footprint.

Biofuels have long been considered an alternative to petroleum-based fuel, but producing them at scale remains an issue. “Large-scale production, including facilities, has not performed well enough to justify realization, either economically or technically,” says Chryssakis. “For example, if it takes 50 years for a forest to mature, and only two per cent can be harvested annually if we are to ensure regeneration, that would limit access to sustainable feedstock.”

Synthetic fuels can use the same infrastructure and engines as petroleum fuels, but they will need to be produced from renewable energy in order to qualify as green. “The issues right now are scaling up production, and identifying suitable energy sources,” Chryssakis says. “For example, it has been estimated that we would need 8 km2 of solar panels to produce enough ammonia to operate one large container vessel for a single year.”

The case for bridge fuels
Despite its status as a fossil fuel, LNG should not be discounted as a short and medium-term solution, Chryssakis maintains. “LNG can contribute a 15–20 per cent greenhouse gas emissions reduction, and it can also serve as a basis for using other fuels in the future. Evolving engine technology could also reduce methane slip from LNG.” All engine makers are working to resolve this issue, he points out. “No one wants to risk stranded assets of ships unable to sail because of emissions restrictions.”

If so-called bridge fuels are abandoned, he says, the alternative is to continue burning oil while in pursuit of the “perfect” solution. “But we cannot bet safely today on a solution that will not be available until 2035 or 2045. It is better to work with what we have, and concentrate on building a future-proof infrastructure that can match future ships.” 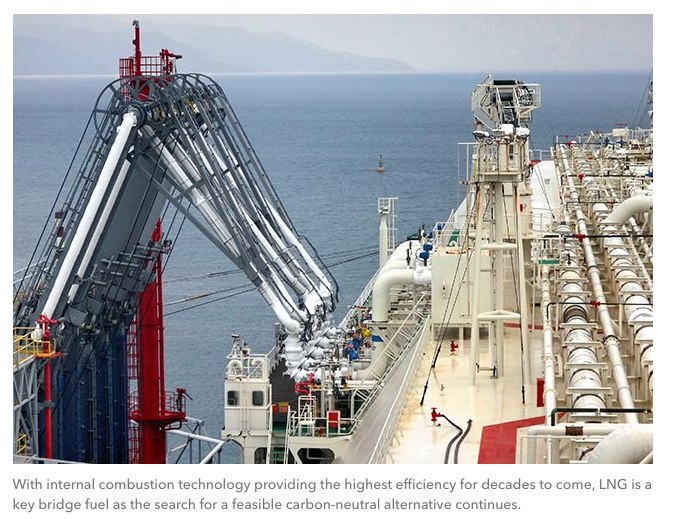 Competition to ICEs
Chryssakis notes that batteries with currently available chemistries are approaching the physical limits of energy storage. “New storage chemistries may emerge that can offer tenfold improvement, but they are still not proven on a commercial scale, and probably the first applications will be seen in automobiles, not large units like ships.”

Fuel cells are more suited than batteries when size is an issue, he says. “But they perform better under constant loads, so they need batteries to even out consumption.” Then there are the issues of fuel access and storage to resolve, as well as fuel production methods. Fuel cell life expectancy also remains a significant variable, he notes.

The relative attractiveness of different power solutions will vary between segments as well, Chryssakis says. “For example, cruise passengers might be willing to pay a premium for cleaner ships. But how quickly are consumer attitudes changing in the same direction?” That being said, charterers and owners in the transport trade are becoming more attentive as consumer sentiment shifts towards green alternatives, and they are actively seeking alternatives, he confirms.

“We have a zero-emission strategy, but we must also be prepared for markets to evolve. Many in the industry want to follow their hearts in one direction or another, but we do not know enough about the right direction yet.”

Keeping ICE options open
“Right now we are still in the phase where we need to explore all available options for ICEs. The most important thing is not to close doors too early. We can experiment today with what is available until the best alternative emerges,” says Chryssakis.

Kjeld Aabo agrees. “We have a zero-emission strategy, but we must also be prepared for markets to evolve. Many in the industry want to follow their hearts in one direction or another, but we do not know enough about the right direction yet.”

ICEs can accommodate nearly all types of fuel, he says, but the market must be ready or manufacturers will not be able to justify committing their design capacity. “There are so many balls in the air now that stakeholders are facing very complicated decisions,” Aabo acknowledges. In such an environment, engine manufacturers believe they can offer a robust option. “We know that ICEs will provide the highest efficiency possible in the foreseeable future. Unless something completely unexpected turns up, ICEs will be around for many years.”
Source: DNV GL Maritime Impact