The Panama Ship Registry deeply regrets the fuel spill on the coast of Mauritius as a result of the serious maritime accident of the vessel Wakashio owned by the Japanese company Nagashiki Shipping Co. Ltd. (Nagashiki Kisen KK).

The Panama Maritime Authority (AMP) said that this accident has caused a state of environmental emergency also occurring at a time of worldwide crisis, and because it is a ship that is registered in Panama the AMP offers its full cooperation to the authorities of the island of Mauritius with regards to the investigations into the causes of the accident, said today the director of Merchant Marine, Rafael Cigarruista.

At present, the Panamanian Ship Registry is conducting the relevant investigations under the rules of the Code for the Investigation of Marine Casualties and Incidents, approved by the promulgation of Resolution A.849(20) of the International Maritime Organization (IMO) on November 27, 1997. The Panamanian Registry has provided information about the vessel and its history prior to the date of the accident.

The ‘Wakashio’ Bulk Carrier / Newcastlemax, a double-bottomed vessel designed for the transport of heavy cargo, was built in 2004 by Universal Shipbuilding Corporation in Japan. The vessel was incorporated to the Panamanian Registry on March 29, 2007, and has all its valid technical certification, issued by the NKCLASS (Nippon Kaiji Kyokai) Classification Society, a statutory certification valid until April 22, 2021, when it must undergo its cycle of inspections for due renovations. 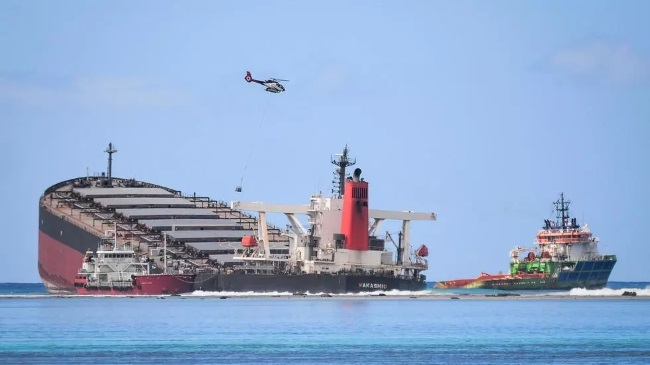 The ‘Wakashio’ was manned by twenty (20) persons of different nationalities; as far as information could be obtained, all of them carried the proper certificates required for their positions and responsibilities on board, as required by the International Convention on Standards of Training, Certification and Watchkeeping for Seafarers and the insurance policies relating to pollution prevention; and as for civil liabilities, they are still in force and all were issued by The Japan Ship Owners’ Mutual Protection & Indemnity Association.

On 14 July 2020, the bulk carrier sailed from Singapore (Offshore Terminal) to Tubarao, Brazil. Everything went smoothly until July 25, when the ship faced adverse weather conditions near the coast of Mauritius. It was then, necessary to perform various maneuvers to change course due to the state of the sea. All maneuvers were supervised by the captain and first officer of the ship who were aware of the situation and weather conditions; At 19:25hrs of the same day, while on the bridge, the captain, the first officer and the chief engineer noticed that the ship stopped moving and that it was stranded, in a latitude position: 20°26.6S and longitude: 057°44.6E, notifying the parties concerned (flag of the ship, ship operators and local authorities).
Source: The Panama Maritime Authority