Last week the CEO of a large bunker trader wrote a great piece about how small and mid-sized shipping companies are not actively hedging their bunker exposure using derivatives.

Bunker prices have risen $90 in the last month. To put this into context, in late April if a shipowner fixed an end-May cargo requiring 1,000mt of bunkers they would have taken a $90,000 hit on their voyage profit. 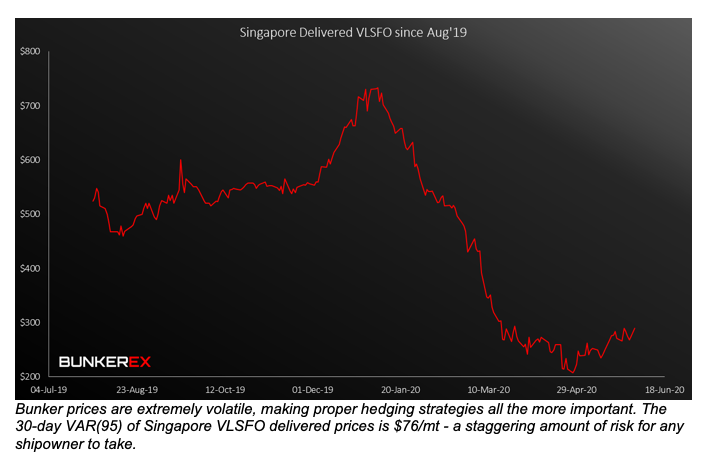 A simple bunker hedging strategy would have avoided this and maintained the originally intended P&L.

Hedging is not speculating; it is about removing uncertainties from the bottom line.

Whilst other transportation industries (e.g. airlines) hedge over 60% of their fuel exposure, why do most shipping companies choose not to hedge in the paper markets? And what other options are available?

The bunker market lives and breathes on credit; the paper market does not

To match the cash flow of the voyage, most shipping companies purchase bunkers on 30 days open credit, typically to finance gaps between their vessel hire and freight receivables.

Suppliers are happy to offer open credit because they have a lien on the ship if the bunkers remain unpaid. The vessel represents fantastic collateral that often far outweighs the value of the fuel.

In the paper markets, no such ‘physical’ collateral exists. Additionally, buyers are not limited by physical volumes (a small shipowner could theoretically buy 1 million tonnes of paper fuel if they wanted).

No collateral plus unlimited volume is a dangerous combination, hence regulation has forced most paper markets to be cleared through an exchange (instead of direct or ‘OTC’). This requires collateral (read: margin) to be put up before the trade.

How much up-front cash is required to trade oil derivatives?

At current rates, a shipowner wanting to use paper to hedge 1,000mt of bunkers in July (one month ahead) would have to deposit $42,000 cash just to place the trade, then continue posting more margin if the market drops.

For most, the opportunity cost is too great. Small to mid-sized shipping companies would rather allocate that cash towards the next fixture, thereby forcing them to carry the risk of rising bunker prices.

Hedge your bunker risk with zero margining and open credit, keeping your cash until 30 days after delivery.

There is a difference between the physical delivered bunker price a shipowner will pay to the supplier and the paper price they use to hedge.

This difference can vary wildly. The difference between Singapore paper and physical delivered prices saw highs of $145 in January but it is currently trading close to $0. 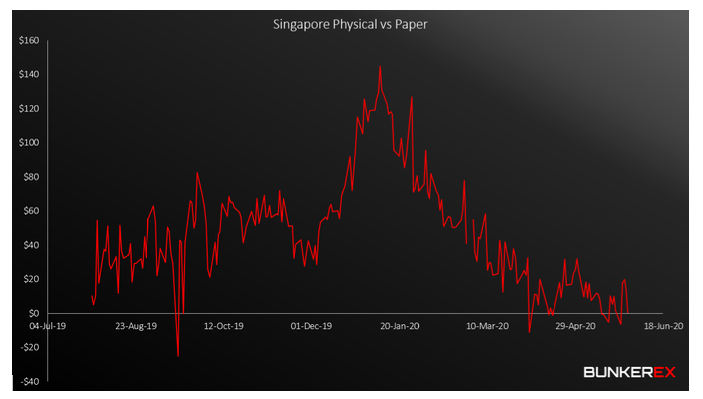 This illustrates that whilst the correlation between physical and paper is strong, it is not perfect. Even a well executed paper-hedging strategy can see wild swings in earnings.

Shipowners can remove this basis risk by booking physical delivered bunkers up to 6 months in advance.

Paper hedges need to be carefully managed
Oil futures are volatile with large swings becoming more common as the market tries to make sense of COVID-19, trade wars and OPEC+ decisions (for our short piece of daily oil market commentary straight to your phone, register here).

On the contrary, physical bunker prices are fairly static throughout the day. “Valid 10 minutes”, a common timeframe for bunker offers, would read “valid less than 1 second” in the paper markets (or the more common “subject to reconfirmation”, always giving last look to the trader).

With a proper paper hedging strategy, the paper should be bought as soon as the bunker exposure is real (i.e. as soon as the vessel is fixed) and sold at the exact time the bunker stem is placed with the supplier/trader (or when the firm counter is accepted).

Mistiming this even by a few minutes can cost well over $10/mt.

Care must be taken to ensure swaps don’t start pricing out and futures don’t expire before the physical bunker stem is made.

It sounds simple, but stories of end-users losing millions by mismanaging their hedges are all too common.

The only way to avoid this risk is to hedge directly in the forward physical markets (learn how here).

No one ever got fired for buying spot

There is an understandable fear of locking in a bunker price and then seeing the market tumble.

Imagine a chartering manager fixes a voyage 2 months out, using a physical forward bunker quote from our live screen of $300, delivered in Singapore.

Later that day, news breaks that sends the oil market down to $290. Watching the screen, the chartering manager takes advantage and locks in the forward delivered price, crystalizing a $10/mt gain on their voyage estimate. 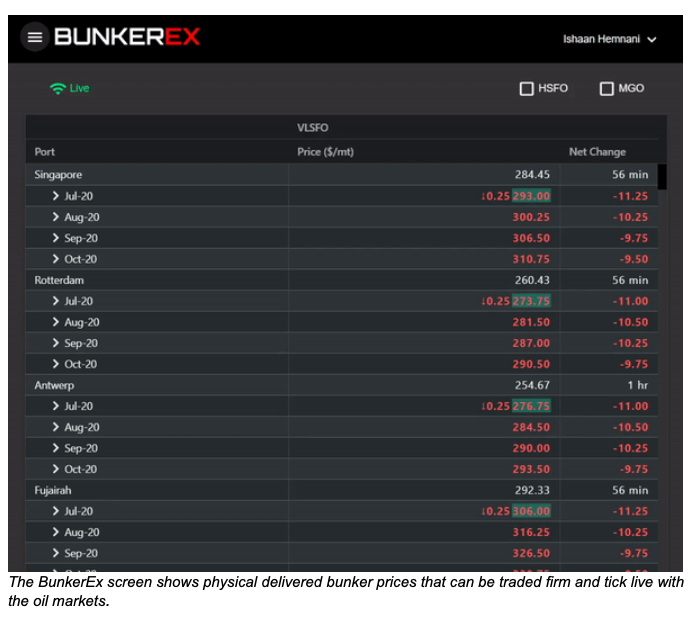 Over the next 2 months, oil prices continue to fall. As the vessel approaches the bunker port, Singapore delivered prices are trading at $250, $40 lower than the $290 paid.

Companies that view this as a $40 “hedging loss” create no upside for their chartering teams to eliminate risks from their voyages, even ones they cannot control (like the oil price).

If spot prices had risen and the bunkers were booked at $350, those same companies often put it down to “bad market conditions” instead of what it really is: a poor hedging strategy.

As always, the bunker cost paid should be looked at in context of the initial voyage estimate (in this case, a $10 “gain”).

For years, bunker traders have been packaging the cost of margin, basis risk and execution into one physical delivered fixed forward price (“FFP”).

BunkerEx have taken this one step further by putting all FFP prices on a real-time trading screen so clients can track the market second-by-second and buy in any dips.

Data shows the bunker market drops by over $5 several times per day, sometimes only for a few minutes. The live screen allows buyers to take advantage of sudden volatility without constantly having to ask and wait for refreshed offers.

All forward prices displayed on the BunkerEx screen are physically delivered bunker prices from major suppliers, require no up-front cash to trade and offer plenty of options to change the port, dates, quantities or vessel even after booking. Buyers pay suppliers directly on their usual credit terms, typically 30 days after delivery.

The average time to get trade approval is just 30 minutes. Get set up now by contacting [email protected], request a trial or speak to our experts about your fuel hedging strategy.