The commissioning has been performed during a gas trial occurring in May 2020 on a TMS Cardiff Gas LNG carrier ship named “QOGIR” manufactured by Samsung Heavy Industries.

The ramp up and performance test of the system was performed in one day only, and thanks to its engineering features, the subcooler can be installed and commissioned in a very short duration.

Indeed, the Air Liquide Turbo-Brayton solution is the most compact unit available and referenced on the market, provided as a single skid ready to be installed and started. 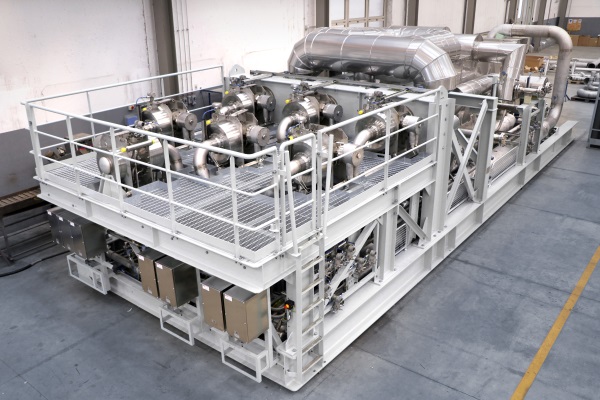 The exclusive and patented technology of Air Liquide Turbo-Brayton solution offers specific technical characteristics such as oil-free and contactless turbomachinery for the subcooling of LNG.

The daily-operation is very flexible (including a turndown mode with high-efficiency), an unlimited number of starts and stops and an immediate response for reliquefaction.

Besides, daily operation and OPEX (operation costs) are drastically reduced thanks to 5-year maintenance-free design.

This is why the majority of shipowners and shipyards have chosen the Air Liquide Turbo-Brayton technology as their standard reliquefaction solution on new building and retrofit vessels. With around 50 units sold on the market during the past two years, the Turbo-Brayton subcooler is today the most acclaimed solution for LNG reliquefaction offshore, on LNG Carriers and Bunker Vessels.