The Marlim fieldis operated by Brazilian national oil company,Petróleo Brasileiro S.A. (“Petrobras”). Upon stable operations of theFPSO being achieved in 2023, “K”Line will have around a 10% stake in the FPSO venture. The FPSO is planned to serve the Marlim oil and gas field revitalization project, which is operated by Petrobras and situated 150 kilometers off the Brazilian coast in the Campos Basin. Both entities which have entered into the time charter agreement and service agreement with Petrobras for the owning/chartering and operation/maintenance of the FPSO are currently co-owned by Yinson andSumitomo. Operations is expectedto commence by first quarter of 2023, with a 25-year charter period thereafter, with no options for extension.This project represents “K”Line’s second FPSO business following the offshore Ghana oil and gas field development project based on the partnership with Yinson and Sumitomo, in which the company participated in 2018, and “K”Line will efficiently accumulate the knowledge and expertise of operation and maintenance of FPSO by dispatching its technical personnel to Yinson’s project team in Singapore from this year onwards.“K”Line intends to expand FPSO business with Yinson and Sumitomo as a core business which generates long term andstable profits, and utilize the accumulated know-how in the succeeding FPSO projects and new energy related businesses.*FPSO facilities are used in the offshore crude oil and gas production industry. They are designed to extract/process hydrocarbons, store crude oil, and offload it directly onto a tanker. Despitethe recent decrease in demand of crude oil caused by COVID-19, the demand for FPSO units (as a preferred deep-water oil and gas production platform) is expected to remain strong for years to come, especially in Brazil. 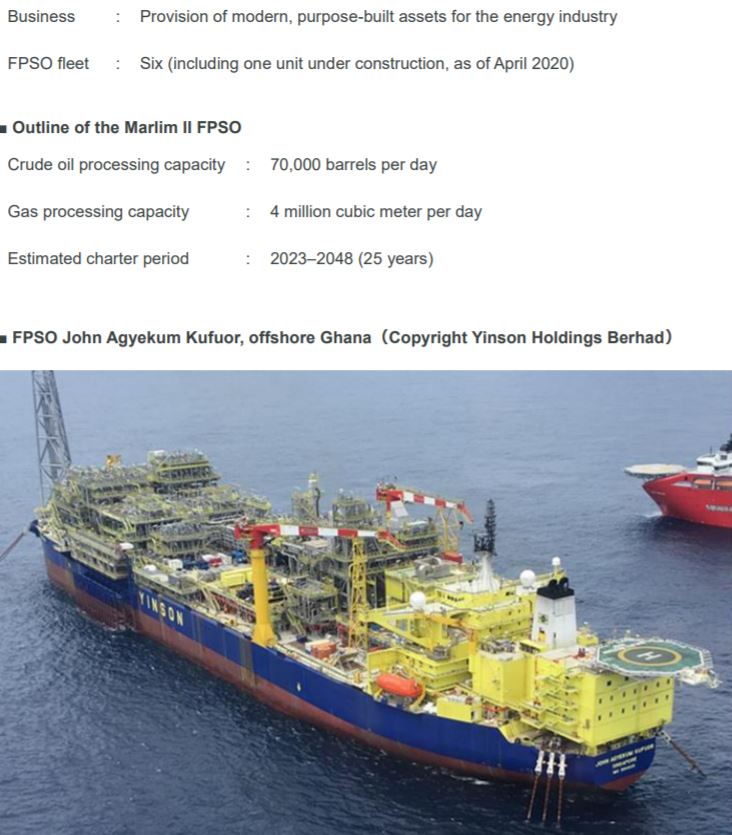