In the past couple of months, it has been a somewhat quieter period in the bunker industry, particularly with regard to VLSFO and LSMGO, with relatively low prices and abundant supply generally.

There is clearly a lot of uncertainty about whether oil demand will carry on recovering given the rise in the Covid-19 cases in a number of countries and what the OPEC+ countries will do with the crude oil cuts going forward.

For now, we have mostly seen bunker prices trailing Brent, although there has been a number of ports where pricing changed in bunker buyer’s favour or against it.

Given the low freight environment in many shipping sectors, opportunities to buy smart and pay less should not be missed and one of the approaches would be to utilise the volume weighted price average calculation when fixing multiple fuel stems.

Selecting ten major bunker ports for the price analysis and ranking them by VLSFO price we found that Singapore, and for some buyers rather unexpectedly, appeared to be at the bottom of the table in the past couple of months meaning it is the most expensive port out of the ten for lifting VLSFO bunkers. This was far from being the case earlier this year.

In general, the ports in the West have cheaper VLSFO bunkers than the ports in the East and this is how the fuel oil arbitrage typically works, however in both regions a number of changes occurred between June and August despite the somewhat muted activity in the market.

Looking back to June, of the ten selected ports, NW European and USG ports including Houston, Rotterdam and St. Petersburg, were the cheapest, while Singapore and Zhoushan had the most expensive VLSFO (Figure 1 overleaf). 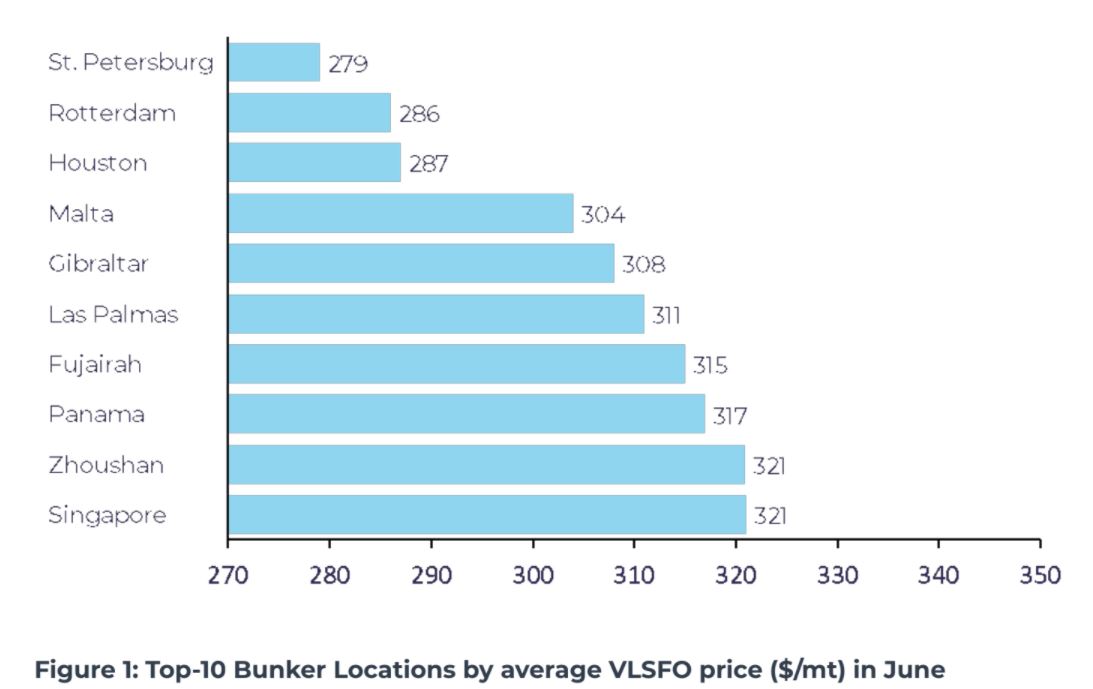 While the difference between the cheapest and the most expensive port shrank from around $200/mt in January to $40/mt in August, the decrease in freight rates emphasizes the importance of every little saving achieved when buying bunkers. 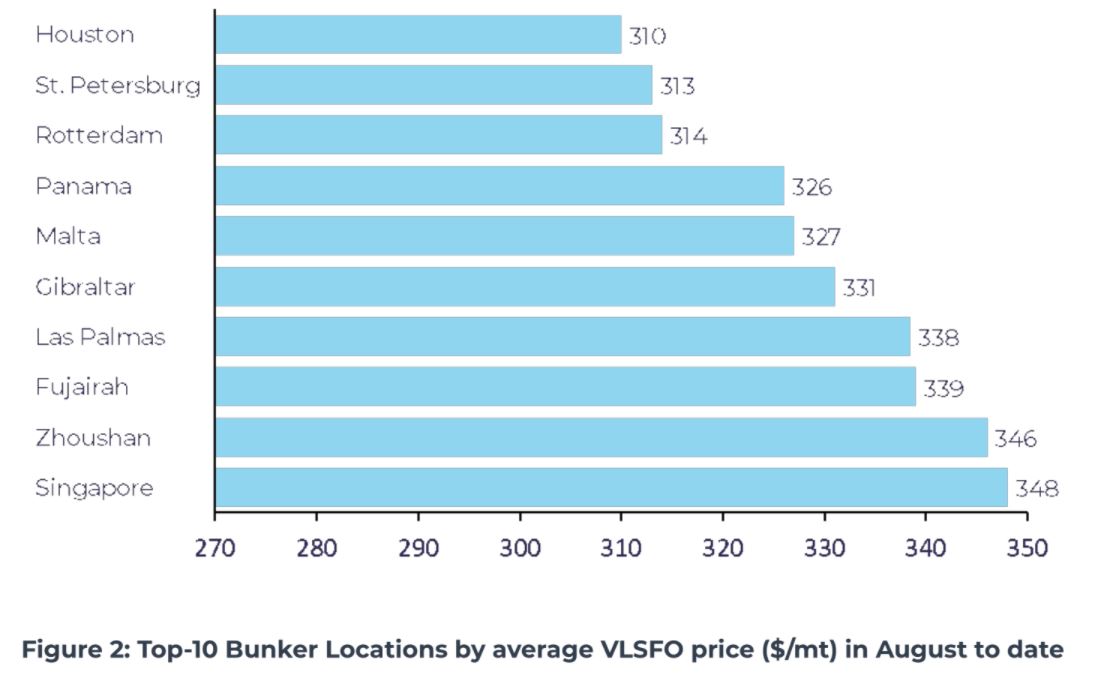 Again, Singapore remains at the bottom of the ranking. While it may not be possible for vessels trading regionally to sail West to pick up cheaper bunkers, for vessels operating globally deviating from the usual buying patters may result in savings.

For example, before for a ship sailing West to East, Singapore was a natural stop for a bunker only call, while now it is worth checking whether a bunker load can be taken elsewhere on the route. Moreover, a rise in the number of quality issues has recently been recorded in Singapore, which is another reason to potentially look at the alternative ports for comparison on price and quality.

St. Petersburg appears to have lost its VLSFO price advantage over Rotterdam in August. While it used to be common for a vessel discharging in Rotterdam to lift bunkers in St. Petersburg if this was the next port of call, currently Rotterdam can provide a good alternative. Lifting in Rotterdam, if operationally possible, could also protect the buyer should the voyage orders change and the vessel no longer heads to the Baltic.

The other location is Panama, which in June was in the top three of the most expensive VLSFO ports and by August became one of the cheapest making it more competitive with Houston.

Even in a quiet market, such changes happen on a weekly and even daily basis so keeping your options open and assessing prices not only in alternative regional ports but also on the other end of your voyage could result in savings.

LSMGO pricing: do not get caught with expensive gasoil

Taking the same ten ports and raking them by the price of LSMGO, the picture is somewhat different (Figure 3). While the cheapest ports are still in NW Europe, Fujairah is by far the most expensive, and with Singapore being somewhat in the middle.

It is also worth noting that since June there has been little change in the port ranking based on the LSMGO price, which indicates that LSMGO price changes are less extreme. 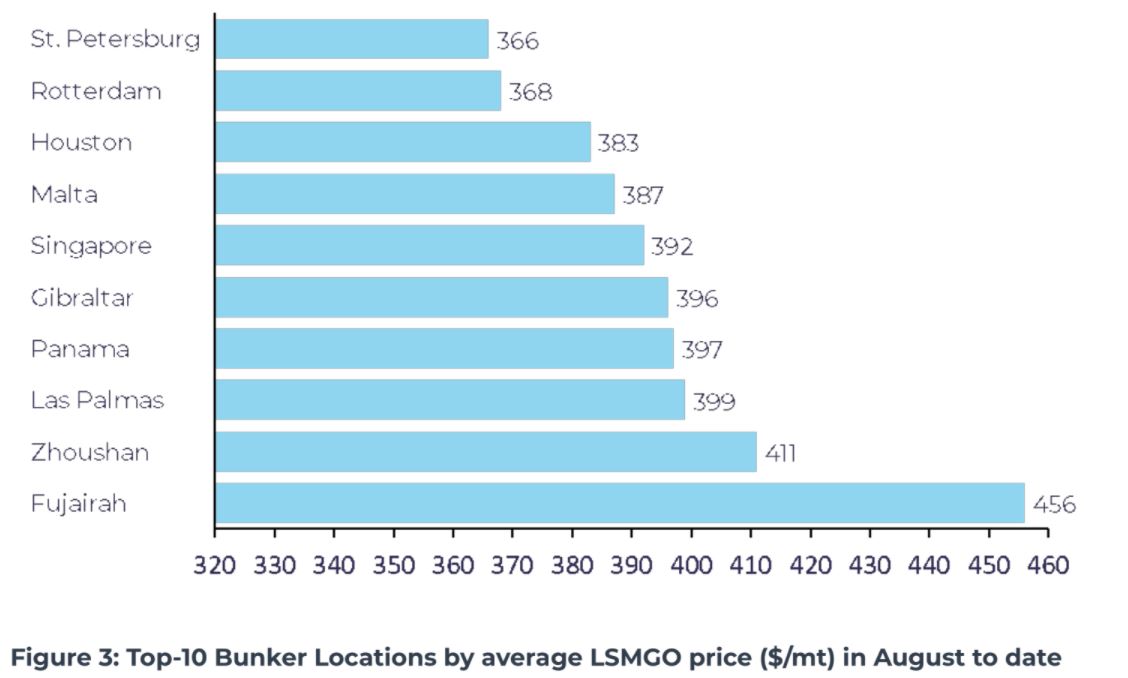 While Fujairah may be almost $10/mt cheaper than Singapore on VLSFO, it is a whooping $60/mt more expensive on LSMGO. These differences should be taken into account when buying bunkers and they show the importance of calculating the volume weighted average price of the bunker fuel bought.

The importance of the weighted price average

For the dual fuel stems it is of great importance to calculate the average volume weighted price to ensure the cheapest bunker port is identified. We have seen on a number of occasions bunker buyers getting caught with buying one fuel cheap and then overpaying on the other and this is currently the case in a number of ports globally.

Figure 4 shows the comparison between Fujairah and Singapore and while VLSFO in Fujairah can be bought almost $10/mt cheaper than in Singapore, LSMGO in Fujairah is more than $60/mt more expensive.

For a rather typical stem comprising of 750mt of VLSFO and 150mt of LSMGO, Singapore would still be the cheapest port given the high LSMGO pricing in Fujairah, saving the buyer around $4 on every ton bought, which in this case adds up to savings in the region of $3,000.

Granted that in the current bunker market environment where the price spreads between different ports are often in single digits, this may not seem like great savings, however when oil prices rise (and eventually they will), these spreads may start widening and increase the potential to either lose or save money depending on the buying approach taken.
Source: Integr8 Fuels