Methanol bunkering is being touted as a viable option for achieving maritime decarbonization and its prospects are set to receive a further boost after the International Maritime Organization grants a formal approval for its use as a marine fuel, said Methanol Institute COO Chris Chatterton.

With regard to the IGF code for methanol, progress was “very good” up until COVID-19, which delayed the IMO’s Marine Safety Committee’s 102nd meeting, when it was expected to receive a formal approval, Chatterton said in an interview to S&P Global Platts on July 21.

IGF code stands for international code of safety for ship using gases or other low-flashpoint fuels.

Still, the interim guidelines for methanol as a marine fuel have been debated and confirmed in full, with no additional proposals to be considered or discussed at MSC 102, he said, adding that this was positive for its uptake.

Even without a formal approval in place relating to the IGF code for methanol, there are already 11 methanol-fueled vessels trading internationally, with about 20 more on order currently.

“On behalf of the IMO, the ISO [International Organization for Standardization] is currently engaged on developing a standard for methanol as a marine fuel – this is a minor technical hurdle albeit it a very important aspect of contractually trading it as a vessel fuel,” Chatterton said.

Methanol is currently traded internationally based on the IMPCA specification, a high purity spec.

The ISO specification is due to be finalized in the first quarter of 2021, but could also experience a minor delay due to COVID-19, he said.

Meanwhile, Lloyd’s Register is also scheduled to release a Methanol Bunkering Technical Reference by August, he said, adding that this “living document” will be duly submitted to the IMO for their consideration and inclusion in future IGF Code amendments.

The Methanol Institute has also joined a study led by the China Waterborne Transportation Research Institute, the think tank of the Chinese Ministry of Transport to consider the technical and operational requirements for the use of methanol as a bunker fuel. The study is also supported by Methanex and Shanghai Huayi Energy Chemical Co., Ltd.

Conventional methanol as a marine fuel leads to a reduction in CO2 of over 15%, nitrogen oxides of between 30%–50%, particulate matter of 90% and sulfur oxides of 90% to 97%, when compared to heavy fuel oil, Chatterton said.

Going forward, when simply blended with either renewable or bio-methanol, GHGs can be further mitigated. Bio-methanol can be efficiently produced from a range of bi-products, waste streams and energy crops.

Renewable methanol, when produced with electrolysis and carbon capture technology, can be significantly decarbonized if those process technologies are powered renewably, can reach net zero status.

Therefore, the flexibility in feedstocks, processes and applications with methanol is much higher than with cryogenic gases with fewer material compatibility and storage issues such as with hydrogen or ammonia, which will take more time to put in place, Chatterton said.

Methanol pricing is relatively predictable and tends to trade within a narrower range than other fuels, which de-risks procurement as a bunker fuel, Chatterton said.

Although current low crude oil prices have hurt pricing of alternative fuels somewhat, “all boats rise and fall with the tide, with the majority of current fuels correlating to the price of crude,” Chatterton said. 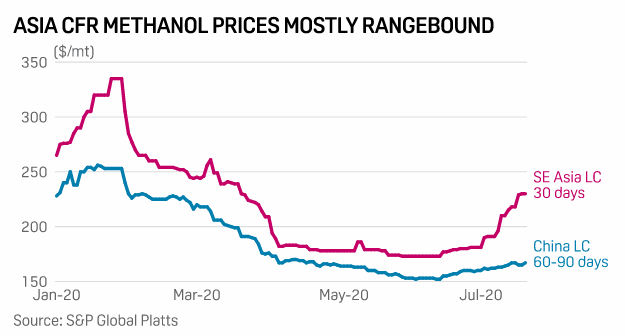 Product carriers would seem to be the most obvious segment where adoption of methanol bunkers will be faster as they already carry methanol on board, similar to LPG, LNG or ethane carriers, Chatterton said.

The challenge for ship owners is to align costs and benefits during this transitionary period to lower carbon fuel where there are many targets currently being introduced by governments, but not enough incentives or firm policy to support achieving such targets. Therefore, analysis should include realistic assumptions not only on the future price of energy, but on the opportunity cost of not switching to a lower carbon fuel, he said.
Source: Platts