Events in the past few months have darkened the outlook for many seaborne dry bulk commodity trades in 2020 and later. Uncertainty about future global trends, both in the near and longer term, has been greatly intensified by the economic recession resulting from the coronavirus pandemic. Yet grain and soya trade looks well placed to continue growing solidly.

Attempts to predict commodity movements have become more hazardous. The sudden, exceptionally severe downturn in the world economy, caused by government measures needed to control the pandemic, is having devastating effects in most countries. Restrained consumer and investment spending is a prominent feature. Negative effects on dry bulk commodity import demand have followed. Signs point to an extended period of especially difficult economic problems, which could limit recovery in industrial activity and trade.

Grain and soya trade is not completely insulated from these overshadowing influences. But food supplies are usually accorded top priority, and cereals and oilseeds for human or livestock consumption are a crucial component. In the longer term, further population growth is likely around the world. Together with improving living standards and changing diets for many people – even if this process is held back by slower economic progress than previously envisaged – one implication is rising global demand for, and imports of, grain and soya.

How the trend has evolved
Grain and soya trade comprises about one-tenth of all global seaborne dry bulk commodity trade, and is the third largest segment. Annual volumes, although substantial, are not as large as those of iron ore or coal. World trade in the four main grain and soya components – wheat, coarse grains (mainly corn), soyabeans and soyameal – during the past decade are shown in the graph. 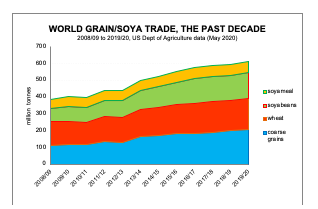 Clarifying the data, these US Department of Agriculture statistics are based on marketing years reflecting the pattern of world harvests and new crop supplies. An October to September marketing year is used for two-thirds of the total, comprising coarse grains (corn plus barley, sorghum, oats, and rye), soyabeans and meal. Wheat trade, the remainder, is based on a July to June year. Trade includes all international movements (but not internal trade within the European Union), and is mostly seaborne.

An upwards trend during the past decade is evident. The world grains and soya trade volume totalled around 400 million tonnes annually at the start of this period, rising to an estimated 613.5mt in the current 2019/20 marketing year ending September 2020. Over the entire decade, growth based on these calculations was 212mt or 53 percent. Within this incremental 212mt, coarse grains contributed 43 percent of the extra volume, wheat 23 percent, and soyabeans/meal 35 percent.

In the past ten years from 2009/10 to 2019/20 coarse grains trade saw the fastest expansion, a 76 percent growth rate, compared with a much lower 35 percent growth rate for wheat. Soyabeans recorded the second highest rise, 69 percent while soyameal grew by 20 percent.

Perceptions of brisk expansion through the past decade are modified by evidence of a sharp deceleration in recent years, followed by growth regaining momentum in the current 2019/20 period. After two consecutive years when annual growth exceeded 5 percent (2014/15 and 2015/16), global grain and soya trade increases slowed to 3.9 percent, 2.6 percent and 0.6 percent respectively in the next three years. Within the current period a return closer to previously achieved performance, 3.1 percent, is estimated.

Changes among importers
What propelled this upwards trend? One particularly strong influence was expansion of China’s purchases. Grain and soya imports into China more than doubled, from 55.6mt in 2009/10 to an estimated 113.0mt in 2019/20, contributing a quarter of the global increment. Within that overall rise soyabeans rose by 82 percent from 50.3mt to an expected 92.0mt in the current year, two-thirds of China’s total increase, boosted by soya use in rising animal feed output.

Elsewhere around the world there was a pattern of solid expansion in the use of imported grain and soya in the manufacture of livestock feed in many countries. Population growth coupled with urbanisation – a rising proportion of people living in towns and cities – amid improving living standards and changing diets all supported grain and soya consumption, and import demand. The trend was reinforced by preferences for additional meat and dairy products in diets, resulting in expanding animal herds and associated livestock feed production.

These influences were seen in varying degrees in several especially significant areas. North Africa, some sub-Saharan African countries, the Middle East area, Mexico, and numerous countries in south-east Asia added large additional volumes to annual grains and soya imports during the past decade.

An overview of future growth
When prospects for the future world trend in grain and soya trade are assessed, a question immediately arises. How much has the outlook been affected by the economic upheaval caused by the coronavirus pandemic, and its unclear but probably extended aftermath? At present, signs point to limited adverse effects in the short term, the next twelve months, while the longer term impact over years ahead may not be especially negative either.

As an illustration of a view which still seems valid, in February this year (just before the full impact of the pandemic had become visible) the US Department of Agriculture published its regular annual long-term projections for the global agricultural commodity market, including cereals and oilseeds. These, arguably, offer a plausible view of a possible outcome. The projections reflect stated assumptions about a wide variety of general and specific influences, and it is emphasised that the view is not presented as a firm USDA forecast; instead it is a “conditional, long-term scenario about what would be expected to happen” in stated circumstances.

The graph below shows a summary of the projections for world grain and soya trade over the decade ahead. Calculations suggest that an upwards trend in the total volume could continue through the period. But, compared with the past ten years’ average, a markedly lower average annual growth rate for these trades together is envisaged by USDA analysts. 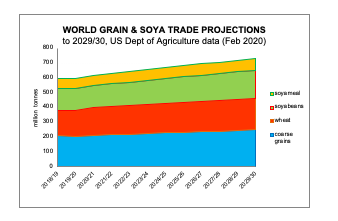 During the ten years from the current 2019/20 marketing year to 2029/30, the figures suggest a cumulative rise amounting to just over a fifth (22 percent) in annual grain and soya trade volumes. The 2029/30 volume could reach 732mt, a 134mt increase. Growth rates indicated for the segments vary within a range of 18 to 26 percent. Soyabeans trade may grow at the fastest pace, 26 percent, followed by coarse grains at 23 percent. For wheat, a 20 percent growth rate seems achievable, and 18 percent for soyameal.

This pattern implies annual growth in the entire grain and soya category averaging 2 percent through the period, a notable deceleration compared with 4.4 percent average for the previous decade. The assessment appears to reflect slower expansion in the past few years, and clear signs that some of the positive influences which have propelled trade advances during the 2010s may be distinctly less powerful in future.

Projections for importers
Significant changes, contributing to the view of world grain and soya trade outlined, are shown by a breakdown of projections for the main importing countries or regions. These importers can be identified as China, other Asian countries together, the Middle East region, the European Union (including for statistical purposes UK), and a fifth category comprising all other countries. China currently comprises 17 percent of the total, other Asian countries 25 percent, the Middle East 12 percent, European Union 10 percent and all others 36 percent. 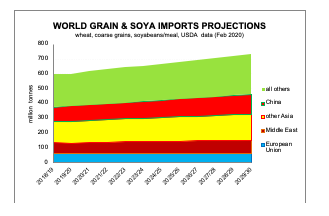 In the European Union grain and soya import growth potential apparently is minimal over the decade to 2029/30, projected at 3 percent. But elsewhere substantial incremental volumes are envisaged, according to the USDA projections. China may be the most rapidly growing importer, with annual volumes rising by 31 percent, accompanied by a 19 percent increase in the other Asian countries sub-group. The Middle East may see a 24 percent rise, similar to the 25 percent rise envisaged in the remainder of world segment.

Growth in China is expected to be mostly driven by a sustained upwards trend in soyabeans imports, rising by 30mt from 83mt in 2018/19, to 113mt at the end of the decade. Increasing domestic soyabeans production in China – which currently supplies a limited part of the market – is assumed to be insufficient to satisfy demand during this period. Expanding demand both for soyameal as a protein ingredient used in livestock feed production, and soyaoil used in cooking and food manufacture, implies additional soyabeans imports. Importing soya in the form of beans, for processing in China’s crushing mills, is an established feature.

In other Asian countries, where 2018/19 grain and soya imports totalled 143mt, growth over the decade ahead is likely to be concentrated in south-east Asia. Within this sub-region expectations of expanding volumes, especially of wheat, coarse grains and soyameal, reflect several influences. Growing populations and incomes, improving living standards, and strengthening livestock feed consumption amid increasing poultry production suggest a positive outlook.

Among grain and soya importing countries elsewhere, favourable influences affecting longer-term growth are expected to persist, except in Europe. EU import demand seems set to remain almost flat during the next ten years because none of the usual growth drivers are visible. In the Middle East area population growth, coupled with increasing livestock production and requirements for animal feed supplies, implies rising cereals and oilseeds/meal imports. Similar features are evident in a wide range of other developing countries around the world, potentially raising imports of wheat, coarse grains and soyabeans/meal over the period up to 2029/30.

Optimism or realism, or both?
Almost any positive outlook for a global dry bulk commodity trade, formed before the coronavirus pandemic, is open to questions about how realistic it is now. Doubts about validity imply that a less positive, or perhaps negative, viewpoint would be more realistic and thus convincing. Is this attitude applicable to grain and soya trade as well?

The all-pervasive nature of the covid-19 pandemic, and the drastic measures adopted by governments in most countries to contain it, has resulted in normal economic activity being suspended in the past few months. Activity may continue to be heavily disrupted for some time ahead. Already it is clear that an exceptionally severe world recession is unfolding, with a risk of this becoming an extended depression. Implications for numerous dry bulk trades if a prolonged slump occurs, especially those trades involving industrial commodities related to manufacturing processes and construction work, are highly unfavourable.

Grain consumption and import demand around the world is unlikely to be unaffected by a prolonged severe economic recession, with its particularly damaging consequences for consumer incomes. But food is such a basic necessity that providing adequate supplies is usually a top priority for governments. Much or most of the cereals and oilseeds imported by all countries is among the essential elements required to sustain human life, while also avoiding or minimising related political disturbances. This argument suggests that prospects for grain and soya trade both currently and in the longer-term have not been greatly modified by recent events.

Other influences may intervene in the longer term. Political conflict between countries, prompting trade disputes, have repercussions on the volume and pattern of trade, including grain and soya. Government policy emphasis on domestic harvests, for the purpose of reducing reliance on foreign supplies, is a negative influence. Environmental pressures continue. Livestock disease outbreaks, such as African Swine Fever recently, may reduce animal herds and related feed ingredients consumption and imports.

Despite these imponderable aspects, the global grain and soya trade projections discussed for the years ahead still appear to offer a realistic view of potential longer term expansion. An average growth rate of up to 2 percent annually, for this commodity trade category, seems to be an entirely plausible expectation.
Article by Richard Scott, managing director, Bulk Shipping Analysis and visiting lecturer, London universities, on behalf of Hellenic Shipping News Worldwide (www.hellenicshippingnews.com)