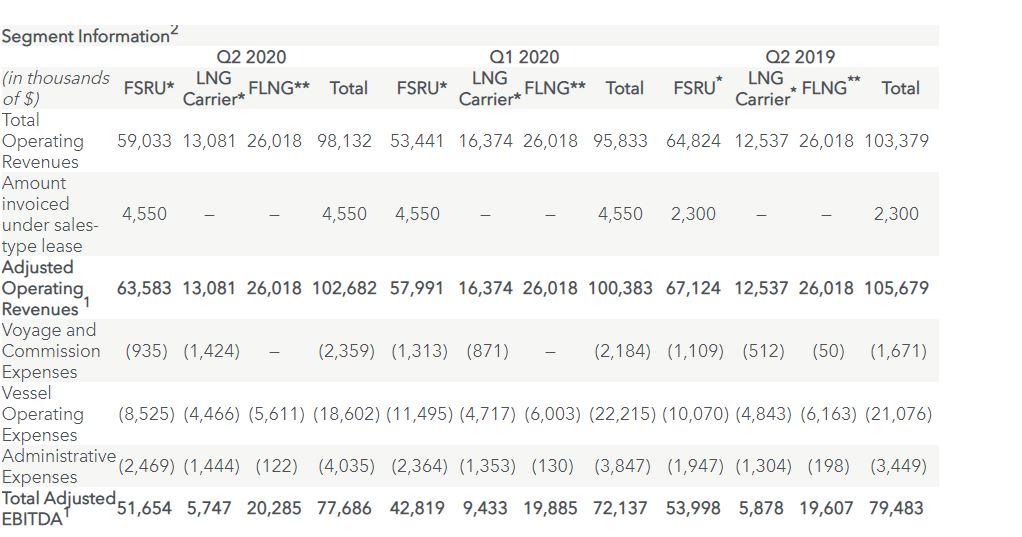 * Indirect administrative expenses are allocated to the FSRU and LNG carrier segments based on the number of vessels.
** Relates to effective share of revenues and expenses attributable to our investment in Golar Hilli LLC (“Hilli LLC”) had we consolidated its 50% of the Hilli common units.

As is customary, the Partnership’s Q2 Adjusted Operating Revenues1 including amounts invoiced under the Golar Freeze sales-type lease and the Partnership’s effective share of operating revenues from FLNG Hilli Episeyo, increased relative to Q1. The increase from $100.4 million to $102.7 million reflected an additional 54 days hire in respect of the FSRU Golar Igloo, which commenced its 2020 regasification season on February 24, but was partially mitigated by reduced revenue in respect of the Golar Maria which was on hire for fewer days during the quarter and at a lower daily rate. Voyage, charter hire and commission costs at $2.4 million were in line with the prior quarter. Fleet wide average daily time charter earnings1 (“TCE”) increased from $93,500 in Q1 to $96,300 in Q2.

Vessel operating expenses were down quarter on quarter as Q1 costs were affected by planned maintenance during FSRU Golar Igloo’s scheduled winter downtime and costs of storing up ahead of its 10-month 2020 regasification season. Reduced expenditure in respect of the FSRU Golar Igloo in Q2 together with a general fleet-wide deferral of repairs and maintenance due to COVID-related movement restrictions, resulted in a $3.6 million reduction in operating costs, from $22.2 million in Q1 to $18.6 million in Q2. At $4.0 million for the quarter, administrative expenses were in line with the prior quarter.

Interest expense decreased $0.4 million from $17.5 million in Q1 to $17.1 million in Q2. The impact of a further decrease in LIBOR and ongoing debt repayments was substantially offset by higher margin costs and a quarterly recognition of a potential 5% premium payable at maturity in respect of the two May 20, 2020 amended high yield bonds.

A relatively small decrease in interest rate swap rates during the quarter contributed to a smaller $4.5 million Q2 loss on derivative instruments, compared to a Q1 loss of $46.8 million. As of June 30, 2020, the average fixed interest rate of swaps related to bank debt, including the Partnership’s effective share in respect of Hilli Episeyo was approximately 2.4%.

Utilization increased during the quarter, from 82% in Q1 to 92% in Q2. This was driven by a full quarter’s employment of the Golar Igloo, partially offset by a small decrease in utilization of the Golar Maria as a result of idle days between charters.

COVID related restrictions meant that the crew of Golar Mazo, which had been prepared for layup during Q1, did not disembark until mid-May. As a result, operating costs for this vessel, although lower in Q2, will not be down to customary layup levels until Q3. All other vessels continue to operate normally, including the FSRU Nusantara Regas Satu which recently received its 250th LNG cargo, and the FLNG Hilli Episeyo, which exported it’s 2.5 millionth ton of LNG during the quarter and recently offloaded its 42nd cargo.

Postponement of several scheduled maintenance tasks contributed to reduced operating costs for the quarter. Logistics permitting, these are now expected to take place during late Q3 and into Q4. As a result, despite reduced costs in respect of Golar Mazo, operating costs are expected to increase slightly over this period.

As of June 30, 2020, Golar Partners had cash and cash equivalents of $32.8 million. A limited number of slow paying customers seeking to preserve liquidity during the COVID outbreak contributed to a $9.5 million increase in accounts receivable during the quarter. Subsequent to June 30, $13.1 million of outstanding charter hire has been collected. Including the Partnership’s $405.8 million share of debt in respect of FLNG Hilli Episeyo, Adjusted Net Debt1 as at June 30, 2020 was $1,483.3 million. Q2 2020 Total Adjusted EBITDA1 amounts to $77.7 million. Based on the above, the Q2 Adjusted Net Debt1 to Annualized Adjusted EBITDA1 ratio was 4.8x. As of June 30, 2020, exclusive of a $100.0 million forward start swap, Golar Partners had interest rate swaps with a notional outstanding value of approximately $1,270.8 million (including swaps with a notional value of $250.0 million in connection with the Partnership’s bonds and $405.8 million in respect of Hilli Episeyo), representing approximately 84% of total debt and finance lease obligations, including assumed debt in respect of Hilli Episeyo, net of restricted cash.

The average fixed interest rate of swaps related to bank debt, including the Partnership’s effective share in respect of Hilli Episeyo is approximately 2.4% with an average remaining period to maturity of approximately 3.6 years as of June 30, 2020.

Corporate and Other Matters

Total outstanding and exercisable options as at June 30, 2020 were 99,000. A further 70,752 Restricted Stock Units were also issued in Q2, which will vest over three years.

The Partnership’s Annual General Meeting is scheduled for September 24, 2020 in Bermuda and the record date for voting was July 29.

On August 5, Class 1 Director, Audit and Conflicts Committee member Alf Thorkildsen resigned his position. The Partnership thanks him for his service. At the time of the Partnership’s forthcoming Annual General Meeting, the elected Directors on the Partnership’s Board intend to appoint Neil Glass to replace Mr. Thorkildsen. Mr. Glass has served as a director of Borr Drilling Limited since December 2019 and he also serves as an Audit Committee Member. Mr. Glass was also appointed to the Board of 2020 Bulkers Ltd., on July 1, 2020 where he also serves as an Audit Committee Member. Mr. Glass worked for Ernst & Young for 11 years: seven years from their Edmonton, Canada office and four years with their Bermuda office. In 1994, he became General Manager and in 1997 the sole owner of WW Management Limited, tasked with overseeing the day-to-day operations of several international companies. Mr. Glass has over 20 years’ experience as both an executive director and as an independent non-executive director of international companies. Mr. Glass is a member of both the Chartered Professional Accountants of Bermuda and of Alberta, Canada, and is a Chartered Director and Fellow of the Institute of Directors. Mr. Glass graduated from the University of Alberta in 1983 with a degree in Business.

The quarter commenced with LNG prices at around $2.26/mmbtu and quoted steam turbine (”ST”) spot rates of around $40,000/day. During April, Japan Korea Marker (“JKM”) continued to soften, with prices below $2.00/mmbtu by month-end. Henry Hub futures for June exceeded Title Transfer Facility (“TTF”) for the first time in a decade, and on May 5 exceeded JKM for the first time ever. At this level, there were negative economics in shipping US LNG to both Europe and Asia. In response, around 130 US cargoes scheduled for loading over the summer months are believed to have been canceled during the quarter. The number of vessels carrying US cargoes peaked at around 74 in January, falling to 50 in May and then fell to a 16-month low of 31 in June. LNG export reductions that occurred elsewhere, including from Malaysia and Egypt, and other scheduled maintenance of liquefaction plants also removed LNG from the market that otherwise would have required shipping. Global liquefaction capacity utilization fell from around 90% in April to around 75% at the end of June. Prompt available tonnage throughout the quarter typically hovered between 10-15 mainly steam turbine vessels (out of a global fleet of 555 LNG carriers), pointing to a relatively liquid chartering market that kept vessels moving. Despite this underlying tightness, quoted spot ST shipping rates from early May through to the end of the quarter rarely exceeded $20,000/day.

With the completion of Freeport and Cameron T3 and Elba Island T9 ready for service, the roll-out of the first wave of US liquefaction is concluding. Originally poised for global production additions of around 30mtpa, COVID-related market turmoil and resultant shut-ins will likely see 2020 growth limited to between 5 and 10mtpa. The un-utilized 20-25mtpa of production capacity is expected to ramp up from 2021. Between now and 2023, new nameplate capacity due to complete and become operational will be around 30mtpa. From 2024, a new wave of projects with a combined nameplate capacity of around 100mtpa are then scheduled to start-up in phases, completing in 2027. On the back of these market developments there has been a significant reduction in vessel new build orders year to date.

Despite entering Q3 with soft gas prices (JKM at $2.15/mmbtu), narrow price spreads and high inventory levels, there has been an emerging optimism among market players who expect a stronger rate environment heading into the autumn and seasonally stronger winter. Key Asian markets are showing signs of recovering demand. This is beginning to erode the LNG supply overhang, resulting in fewer US cargo cancellations for September, and should support stronger prices over the coming months. This is shown by JKM recovering to its current level of $3.60/mmbtu with March 2021 JKM paper trading at around $5/mmbtu. The current gas price contango also supports this sentiment. A step up in inquiries for multi-month charters typically commencing in September/October and ending in February/March has been noted.

Analysts forecast further substantial increases in LNG prices over the 2020 – 23 period. Rising prices are expected to facilitate a re-emergence of regional price differentials, inter-basin trading and rising ton miles, all of which will support improving levels of vessel utilization without compromising LNG’s price competitiveness relative to other less environmentally friendly energy sources. Low oil prices and lower LNG spot prices should therefore continue to support the shift from coal to gas fired power production bolstering demand for LNG, its freight, and for FSRUs.

The Partnership will focus on refinancing its 7-vessel $800 million bank facility before year end. As at June 30, 2020, $542 million was outstanding under this facility, and at maturity in April 2021, $503 million is scheduled to be outstanding. At maturity, the vessels that secure this facility are expected to have a revenue backlog1 of $680 million. Total Adjusted EBITDA1 attributable to those vessels over the next 12-months amounts to around $130 million. A modest upsizing of the facility is therefore likely, with any liquidity released to be used to pay down bond debt, thereby reducing interest costs. Having refinanced the secured debt, management will then focus on refinancing the two outstanding unsecured bonds totaling $400 million. The intention is to complete this prior to May 2021 when the call option increases from 100% to 105% of par.

From a commercial standpoint, management will focus on securing maximum possible utilization of the Golar Maria prior to her term charter that commences in Q4. Although the market is expected to improve materially from current levels, rates are unlikely to be attractive enough to support re-activating and drydocking the Golar Mazo ahead of the winter trading period.

Historically low gas prices, and an expectation that they will remain structurally low for the foreseeable future, continues to allow LNG to compete with coal on both an environmental and an economic level. Golar Partners, in partnership with Golar Power in certain cases, will continue to focus on matching these new markets for low cost LNG with appropriately sized FSRU solutions.

Strategic alternatives to better use the Partnership’s $1.9 billion of revenue backlog1 to maximize long-term shareholder value continue to be evaluated and are being narrowed down. In the meantime, despite the potential for a small drop in revenue and an increase in operating costs, Q3 Total Adjusted EBITDA1 is expected to be broadly similar to Q2.
Source: Golar LNG