In the past few months covid-nineteen has cast a dark shadow over dry bulk commodities. Previous trade forecasts were rendered null and void, replaced by new forecasts of dubious plausibility. The path of the pandemic and its consequences for commodities is not yet clear. But grain and soya predictions are, perhaps, more convincing than those for other trades.

Availability of cereals, and to a great extent also oilseeds, usually attains priority status as an essential product. This contribution to food supplies is widely regarded as a basic necessity for sustaining human life and preserving civilisation, including minimising political disturbances arising from food shortages. Research just published reinforces expectations of longer-term growth in global grain and soya trade.
. .
A refreshed outlook
World trade in wheat, corn and other coarse grains, and soyabeans could expand by about one-sixth during the period up to the end of the current decade. This positive outlook is based on a new set of projections, published in July 2020 by the Organisation for Economic Cooperation and Development (OECD) jointly with the United Nations Food and Agriculture Organization (FAO), entitled ‘OECD-FAO Agricultural Outlook 2020-2029’. The trade trends envisaged are shown in the graph. 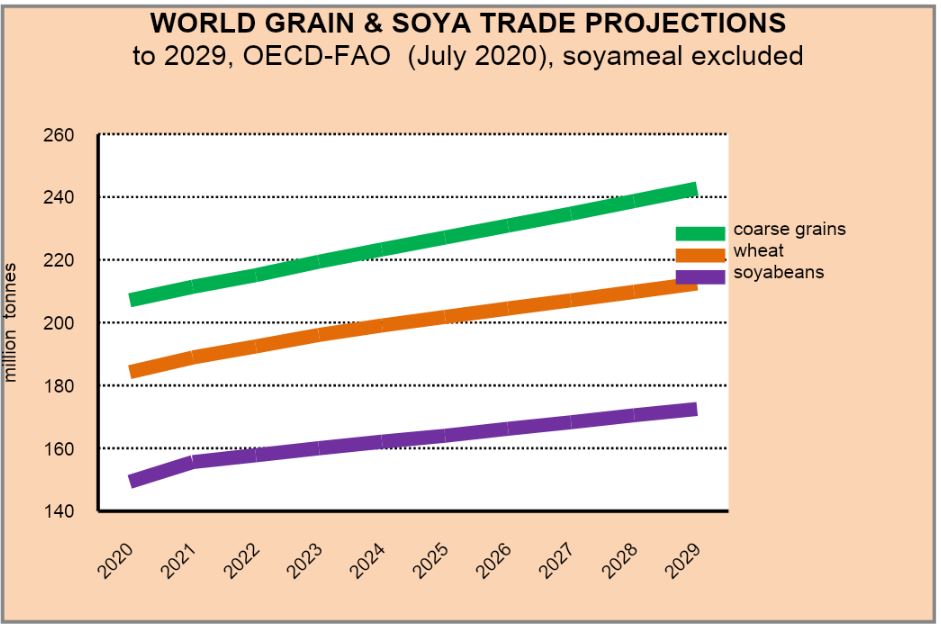 Trends indicated in the report are described as projections, not forecasts, because the figures are based on specific assumptions about the most significant influences. One major influence highlighted is the “unique circumstances” created by the coronavirus pandemic. Owing to difficulty in assessing the impact of this unusual event, the full effects could not be incorporated. The authors suggest that there is more uncertainty about the next few years than about later years.

Figures for global trade shown in the graph (these volumes are mainly seaborne trade, but include some land movements) indicate that the annual wheat, coarse grains and soyabeans volume could total 541 million tonnes in 2020. Nine years later, in 2029, annual trade may reach 628mt, growth of 87mt or 16 percent over the period. Looking at the main components individually, wheat trade is projected to increase by 28mt (15 percent) to reach 213mt in 2029. Coarse grains trade could increase by 36mt (17 percent) to 243mt, while soyabeans trade rises by 23mt (16 percent) to 173mt.

Short-term: hazy, long term: bright
Assessing short-term prospects has become problematic, reflecting the extraordinarily wide range of possible ramifications arising from the covid pandemic. However, assuming that a global economic recovery unfolds over the decade ahead, the OECD and FAO analysts argue that upwards trends in grain and soya trade volumes can be foreseen, based on influences including population growth, strengthening economic activity, and the results of other drivers such as urbanisation, agricultural policies, prices, and consumer preferences.

Focusing on cereals (wheat, coarse grains, rice), the report suggests that the pandemic “will not change the general situation of ample cereal supply and good harvest prospects in the near-future marketing seasons. Short-term risks due to this pandemic are mainly related to distributional aspects and supply problems in some countries which rely on seasonal workers”. Cereals demand in the immediate future could be adversely affected by economic recession in most countries, but signs emerging so far, confirmed by other analyses, point to no weakening of consumption trends.

Potential for global grain and soya trade growth over the next decade, confirmed by the OECD-FAO analysis, is relatively bright, even if annual incremental volumes prove limited. This market segment comprises about one-tenth of all seaborne dry bulk commodity trade. Bulk carriers up to kamsarmax size will derive valuable support if the upwards grain/soya trend persists. This boost will be especially valuable in a period when iron ore and coal trade volumes, comprising half of the dry bulk segment, seem likely to flatten or quite possibly decline.

Although the outlook for grain and soya consumption provides a useful guide to trends in global import demand, the consumption/trade relationship varies. Many importing countries also have substantial domestic production, especially of grain, satisfying a large part of their domestic market. But the linkage between domestic grain production and import demand is not stable, because domestic harvests often vary greatly from year to year, typically reflecting changing weather patterns. In some countries import demand still rises, even where the domestic grain output trend is rising, because consumption is growing faster than production.

Underlying influences supporting grain and soya consumption in many countries could have a strengthening impact on imports over a period of several years. Population growth is a major driver. The OECD-FAO report confirms that “population is the key determinant of total food use. Incomes, relative prices, other demographic factors, consumer preferences and lifestyles, meanwhile, determine a person’s desired food basket”. Between the 2017-2019 average, and 2029, world population is expected to grow by 842 million people, an 11 percent expansion, and “notable gains in per capita income in all regions” could strengthen food demand.

In the soya segment global import demand over the next decade, as well as being boosted by consumption trends, will be further reinforced by limited or no domestic soyabeans production in many importing countries. Beans are imported for crushing into meal and oil. Meal consumption, the biggest part, reflects demand for livestock feed, especially for pigs and poultry, and also reflects the proportional use of soyameal in feed ingredient manufacturing.

Looking beyond the pandemic
The authors of the new OECD-FAO report argue that over the medium term, after any supply chain disruptions have been resolved, the impact of the covid pandemic on cereal markets will be limited. A bigger impact may occur if “national policies move towards sustained higher self-sufficiency goals or to a sustained increase in the levels of (grain) stockholding”.There is another proviso: “if the development of the global economy cannot resume the path it has been on in recent years, demand for cereals ten years ahead could be lower than projected”.

These comments highlight the huge uncertainty involved in attempting to foresee events over such a long future period. This difficulty is greatly exacerbated by current disruptions.

One imponderable discussed is China’s feed (for livestock) demand, domestic supplies, stock changes and the implications for global cereal markets. Four years ago the Chinese government changed its agricultural policy, resulting in a downwards trend in the country’s vast corn stocks accumulated from harvest surpluses. Stock levels can only be estimated, however, as no official figures are disclosed. If inventories prove much lower than now estimated, and extended reductions over the years ahead do not occur, potential for major corn imports could emerge.

Continued soya consumption growth in many countries is envisaged. China’s consumption and imports of beans are especially significant, because imports form such a large proportion of the world market. After an exceptionally severe outbreak of African Swine Fever which reduced pig herds and soyameal use in the past year or so, China’s livestock sector is recovering, with positive effects on meal demand. A shift towards intensive large-scale livestock production, moving away from small-scale traditional backyard production, could boost China’s soyabean imports. However, attempts to lower the average protein meal share of livestock feed rations may have an offsetting impact.

After weighing up all the likely influences, the OECD-FAO analysts calculate a projected growth rate averaging 1.7 percent annually for global trade in wheat, coarse grains and soyabeans during the period ending 2029. Despite the extreme uncertainties surrounding near-term prospects, this perception of a trend stretching out over an extended period ahead seems to offer an entirely realistic view.
Source: Article by Richard Scott managing director, Bulk Shipping Analysis and visiting lecturer, London universities for Hellenic Shipping News Worldwide (www.hellenicshippingnews.com)