Rather than ensuring that crew members performing the job are fully informed and aware of the risks to their health, safety and welfare, we may concern ourselves more about other things such as completing the paper document properly for filing and audit purposes. This makes risk assessments less meaningful.

Take a look at the following scenario. Empty compressed gas cylinders were to be transported from aft deck to the mid ship area so that they could be lowered to the jetty and sent ashore. A cadet and an ordinary seaman are assigned to perform the task without receiving a briefing. The job had been planned by C/O in the morning and a risk assessment had also been completed and filed. They found it physically demanding lifting the bottles by hand but nonetheless continued working that way. While maneuvering over one of the numerous obstacles on deck, the bottle slipped out of their hands and fell onto the deck and the valve opened. There was a slight pressure remaining in the bottle but fortunately not enough to make it react violently. The ordinary seaman also reported suffering from back pain afterwards and that continued for several months. The risk assessment document which had been filed had several points which could have prevented this incident from occurring such as at least one senior crew member to be assigned to the task, consider the use of trolley or other mechanical means to transport the bottles, do not transport the bottles without the safety cap in place, and the risk of long lasting back injury if bottles are lifted using only body strength. 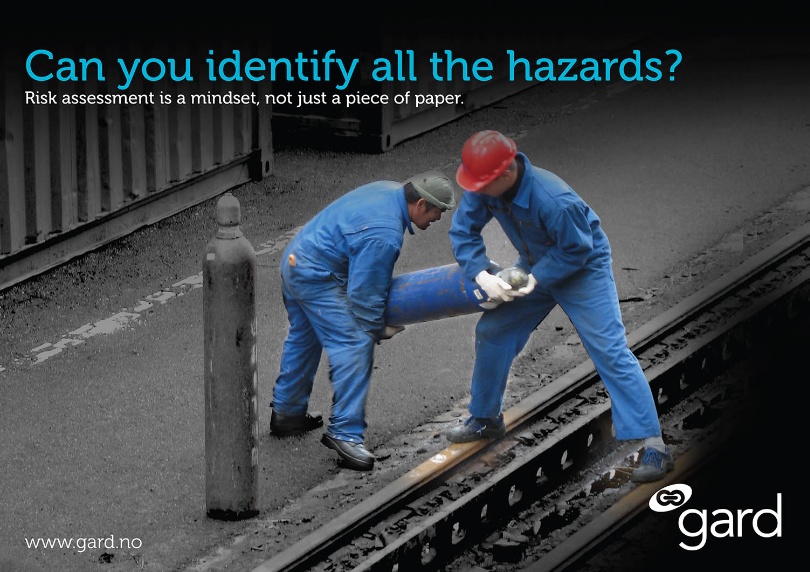 Transferring the knowledge from the paper document to the crew member to make him aware of the hazards and control measures does not take much time. In the above example, it would have taken no more than a few minutes to have a tool box talk with the crew members to discuss the task. It is advisable to involve the crew members performing the job in the risk assessment process.This is also highlighted in the Code of Safe Working Practices (2015 edition – Amendment 4, October 2019). It states that “When carrying out a toolbox talk, it is important to actively involve those carrying out the work and others who may be at risk”.

In addition, walking around the work site and engaging the crew in a discussion on hazards and control measures can help in making the risk assessment process more purposeful. This will help them in developing a safety mindset and maintain a better awareness of their work environment.

Through our poster on the topic, we hope that seafarers onboard would engage in a discussion on the various hazards they notice in the work activity and the control measures they would put into place on their respective vessels when performing similar tasks. Finally we encourage the ship’s crew to also think about the greater question – how to make risk assessments more meaningful?
Source: Gard (http://www.gard.no/web/updates/content/29764043/dont-forget-the-real-purpose-of-risk-assessments)