The Environmental Management System in place at four of the Davies Turner Group’s regional distribution centres in the UK has been certified to the ISO14001:2015 standard by the market-leading provider of technology-led compliance and risk management solutions, Alcumus.

Philip Stephenson, chairman of the Davies Turner Group, said: ”For many years, environmental responsibility has been of great importance to Davies Turner, and we have been actively involved in environmental management initiatives at site level, through re-using, recycling and energy conservation.

“The decision to work towards formal recognition of our environmental management efforts made sound business sense, but was also fully supported by the company’s board of directors as it demonstrates the company’s ethos.

“Over the last few years, we have also seen our clients seeking greater evidence that Davies Turner is fully engaged with environmental, social and governance issues or objectives. Some are making ISO14001 a requirement for suppliers with which they work, providing reassurance that they are dealing with a responsible company which understands its responsibilities for safeguarding the environment. 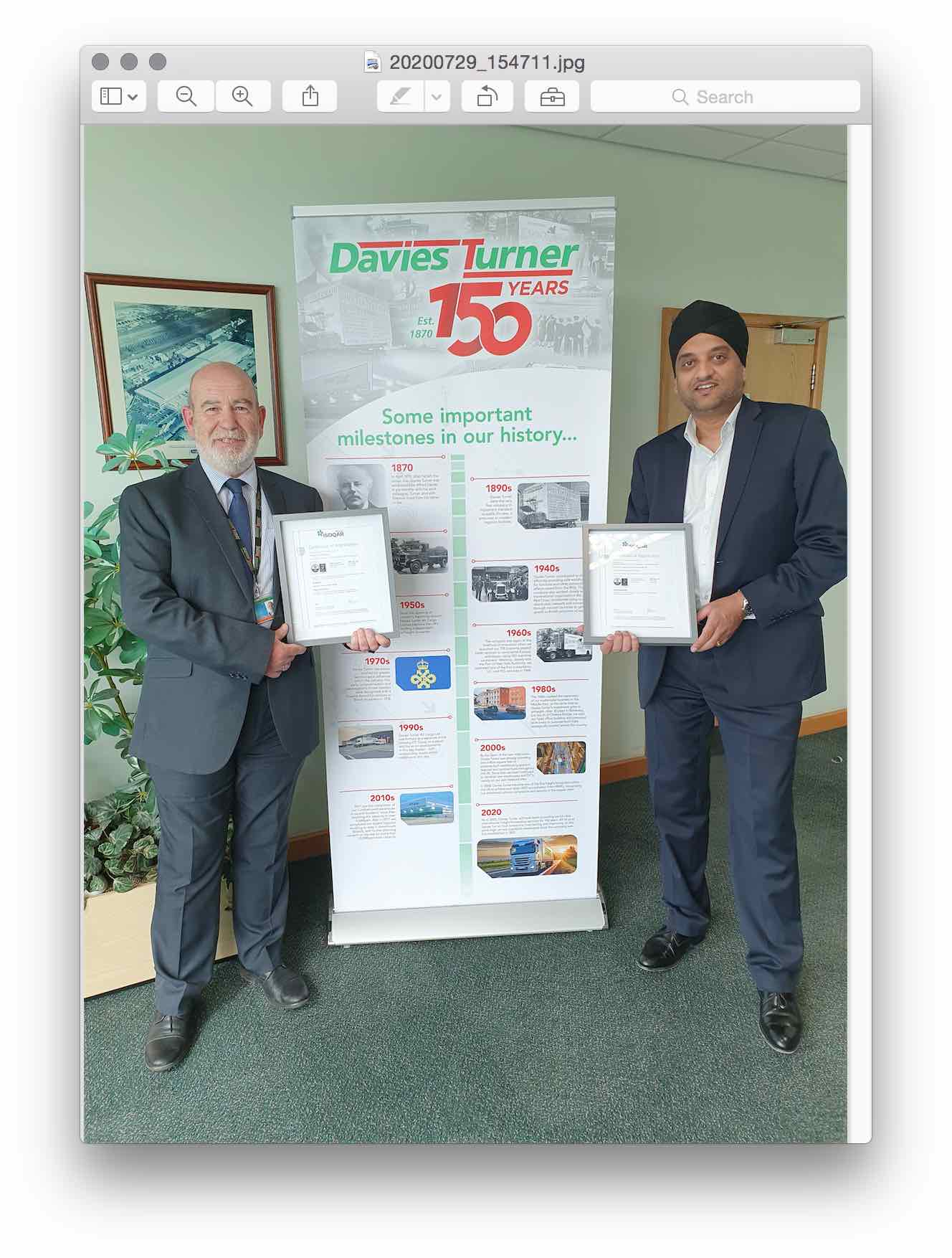 “The certification demonstrates that Davies Turner is committed to environmental issues and is proactively working to minimise our impact on the environment, for example by producing less waste, and in the way we treat or handle waste, in increasing energy efficiency and in our use of natural resources.

“In addition, it helps further differentiate our company from the competition since the number of other UK freight forwarding businesses that have IS014001 accreditation is still very small.”

In October 2019, four of the company’s freight hubs were selected as the first sites to work towards satisfying the requirements of the international standard, with the Environmental Management System (EMS) to be managed centrally from Davies Turner’s headquarters in Coleshill, near Birmingham.

Davies Turner enlisted the support of the consultancy, SQE Assurance to help with the development of a bespoke share-point based EMS to make the process management efficient, easy to manage, up-to-date and relevant to the company’s operations, whilst being fully compliant with the requirements of this ISO standard.

Whilst working towards accreditation, Davies Turner has gained additional business benefits in undertaking waste material processing reviews as well as the utilisation of new and improved balers and compactors, leading to reductions in waste sent to landfill, as well as some income generation through recycling of materials.

Measures are in place to cascade the ethos of the EMS to the other 14 branches and freight hubs within the Davies Turner Group’s network in the UK and Ireland, with the aim of progressively implementing the ISO standard at other locations within the Group as part of a long term business plan for improving all the company’s environmental, financial and operational systems.

The latest approval is in addition to Davies Turner’s ISO 9001 accreditation, achieved in 2013 and recognition by HMRC as one of the UK’s first Authorised Economic Operators (AEO). The company also has Investors in People (IIP) status, meeting the highest standards of people management.

“These certificates, which confirm the company’s achievement of internationally recognised standards of quality, safety, health and environmental responsibility, clearly demonstrate our commitment to all of the company’s stakeholders,” concluded Stephenson.
Source: Davies Turner Group