Freight rates for oil product tankers have returned to more ‘normal’ levels following a spike in late April when rates across all ship sizes reached record highs. LR2 earnings peaked at USD 169,829 on 27 April on the benchmark naptha condensate trade from the Middle East to Japan.

Rates have since fallen to USD 45,459 per day on 19 May. This remains considerably above the average earnings of USD 18,786 per day in 2019 and remain high given the collapse in the global oil demand caused by the coronavirus crisis. The spike in rates in late April brought an end to a period of rates steadily increasing since the end of February. 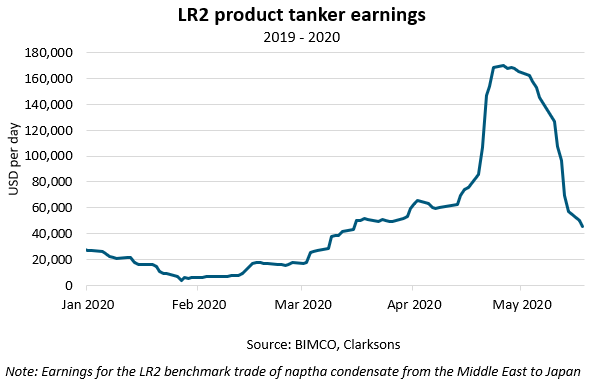 The higher freight rates came on the back of increased demand for storage as well as tonnage being held up due to delays in ports. Furthermore, even as demand collapsed, some refineries were slow to adjust their production levels with unneeded oil products being pushed onto the market.

Now, past the peak of high rates, BIMCO expects freight rates to remain low for the remainder of the year as the lower underlying demand becomes unavoidable. The International Energy Agency (IEA) forecasts that global oil demand will fall by 8.6 million barrels per day in 2020.
Source: BIMCO