The coronavirus pandemic has shutdown much of the US economy for months and even as parts of it reopen, the data is beginning to reveal the extent of the damage that has been done and a slow recovery is taking a tentative shape.

The second estimate for GDP in the first quarter shows a 5.0% contraction from the previous quarter, and just 0.2% growth from Q1 2019. With lockdown measures having only come into force in late March, the second quarter of the year will prove even more damaging for the US economy. The most direct impact of slowing economic growth on the shipping industry is felt by the container shipping industry, with demand for containerised goods one of the first things to be affected. Laden containerised imports to the US West Coast are down 12.5% in the first four months of the year, representing a loss of 434,000 TEU compared to the first four months in 2019.

Goods arriving with nowhere to go

April saw volumes into the US West Coast grew to 823,000 TEU in March, up from 622,601 TEU in March. This was however not a reflection of higher demand, but rather of goods ordered earlier in the year, which were delayed by the shutdown in China in February and started arriving at the West Coast just as demand was in freefall.

Retail sales in March and April show this decrease in demand for container shipping goods. Sales in clothing stores in April this year were just a tenth of what they were in April 2019. Food and beverage stores are the only type to not have seen a fall in sales, but the other stores are what contribute to container shipping demand. 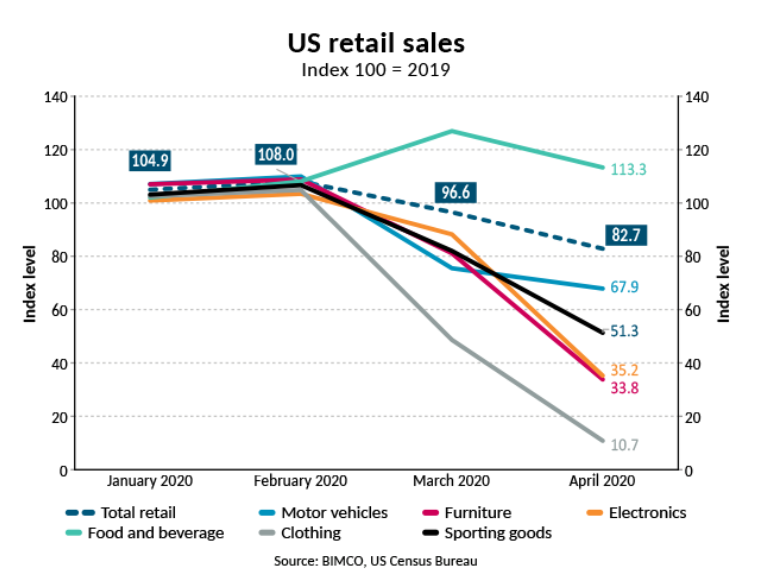 “Sales will likely bottom out in April or May as lockdown measures are eased across the US. However, a return to 2019 levels will take much longer. High unemployment and lower consumer spending power which are set to stick around for longer than the immediate health crises mean that a return to 2019 sales is not just around the corner,” says BIMCO’s Chief Shipping Analyst Peter Sand.

The retail inventory/sales ratio in March already shows how the falling sales have left warehouses stocked up. It rose to 1.53 in March, from 1.43 in February. The ratio had otherwise been falling since its previous peak at 1.51 in December 2018 when inventories were being filled as the trade war meant tariffs on goods from China were due to rise. The rise in the ratio in March comes as sales fell by US 24.4 billion while inventories rose by USD 6.6 billion from February. 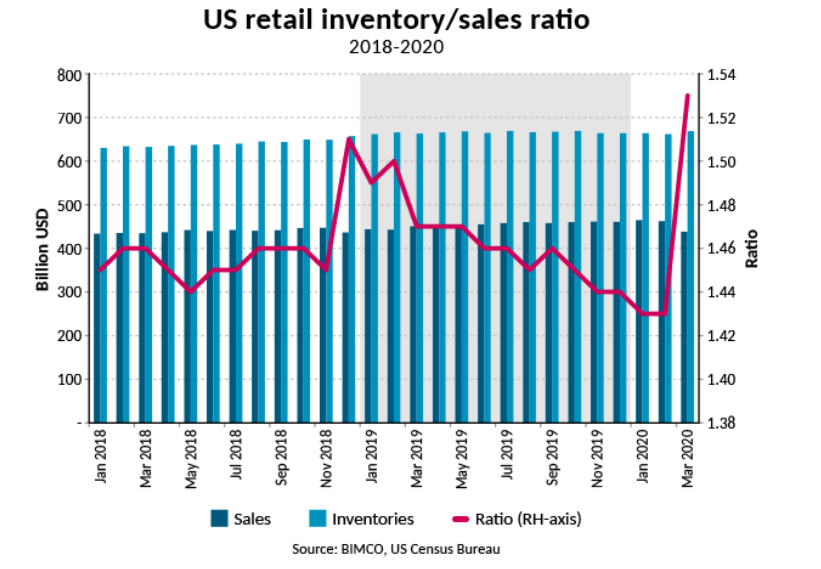 “BIMCO expects that the ratio will have risen again in April, as imports rose while sales fell further. The higher ratio illustrates that demand for shipping has been brought forward rather than growing. This means that even as sales slowly start to recover in the US, demand for shipping will return at a slower pace as inventories are returned to normal levels,” Sand says, adding:

“For container shipping, the outlook is poor as the economic recession and a protracted return to 2019 sales levels, as well as high inventory levels, mean that container volumes on the transpacific trade will not suddenly bounce back.”

Surprisingly, loaded container imports into the Port of Long Beach recovered somewhat in May to 312,590 TEU from 253,540 TEU in April, representing a 7.6% increase from volumes in May 2019. Accumulated in the first five months of the year though, volumes are still down 8.2% from last year. If this trend is reflected across the rest of the west coast container ports, inventories will be filled even further while awaiting a return to higher sales.

Freight rates have so far held up on the Far East to US West Coast trade, up USD 260 per FEU to USD 1,925, and are in fact at their highest level since Q1 2019. However, this has only been driven by widespread blanking of sailings which has driven the idle container shipping fleet to record highs. While this supports freight rates, the idle container ships are still costing owners money. How long carriers will continue to blank sailings to support freight rates remains to be seen.
Source: BIMCO, Peter Sand, Chief Shipping Analyst