The world today is going through extraordinary change. For the energy industry, there are great challenges, from the longer-term effects of climate change to the immediate shock and uncertainty of the global pandemic. But if there are risks, there are opportunities too – as long as industries work with wider society to take urgent action.

The shipping sector is vital to the global economy and never more so than in recent months, when it has been keeping up the supply of essential goods. It accounts for about 80% of the volume of global trade. If the world is to achieve the goals of the Paris Agreement to tackle climate change, it is crucial that sectors such as shipping cut their carbon emissions and do so fast.

Indeed, action is already being taken, coalitions formed and long-term strategies put in place. Today, the World Economic Forum is hosting a day of online sessions between government, business and wider society to address the sectors in which change is hardest to achieve. This week, the International Maritime Organization (IMO) meets to discuss the short-term steps necessary to substantially cut emissions from ships. In a sign of how important shipping is in powering the momentum for change, the IMO is the first regulatory body to set a global ambition for an entire industry.

The IMO’s ambition is to reduce the shipping industry’s greenhouse-gas emissions by at least 50% by 2050, and to reduce the carbon intensity of emissions by 40% by 2030 and 70% by 2050, compared to 2008 levels. The urgency is clear, but the cost of achieving this will be substantial. The total cost of decarbonization has been estimated at $1.65 trillion by 2050.

The scale of the challenge means that any approach needs to involve every aspect of shipping, not just the industry itself. As well as cleaner fuels, it should take in factors such as regulation, government action and societal shifts. No sector can do this alone.

Today, Shell publishes a joint report with Deloitte that is driven by the need for collaboration. We wanted to hear directly from the shipping industry. The report is based on more than 80 interviews with leading industry figures, from CEOs to financiers and ship builders, and highlights possible practical measures to cut carbon emissions – and how to do so fast.

It is led by three principles. The first is to look at every aspect of the shipping ecosystem. The second sums up how to take immediate action; think big, start small, and scale fast. The third focuses on behaviours and triggers. What motivates regulators, companies and customers to make change – and why?

This broad approach prompted many questions, such as: what role will the world’s major ports play? How do you adapt assets with a 20-year lifespan? How do you transform a sector so dependent on heavy fuels? The answers the industry gives in the report are pragmatic, they show a will to work together, and they are optimistic.

The report identifies 12 possible solutions. Operational efficiency is crucial, while others include co-ordinating industry commitments, increasing research and development across sectors, and expanding the infrastructure used to supply and store cleaner fuels.

As an operator of a large fleet of tankers and a supplier of marine fuels, lubricants and services, Shell has a stake in the future of shipping. We have announced our own ambition to be a net-zero emissions energy business by 2050 or sooner in step with society[1], and our shipping operations must be part of this. The World Economic Forum is one of many organizations we work with, and we are part of its joint initiative, the Getting to Zero coalition. This brings Shell together with shipping companies, financial groups, governments and others, with the aim of putting a commercial ship on the water by 2030 that does not add greenhouse-gas emissions to the stock in the atmosphere. In other words, a net-zero emissions ship.

Shell continues to work with customers on lower-carbon fuels such as biofuels, liquefied natural gas (LNG) and hydrogen. For instance, we are working with the Port of Rotterdam and others on a potential plan to create a hydrogen network based around the port. The aim is to use the renewable energy from a nearby off-shore windfarm to produce hydrogen at a new plant. This would be what is often called “green hydrogen”.

We believe that the customer will shape the future. Any industry that wants to address the substantial challenges of today – and tomorrow – has to understand what their customers want and what they need. Customer power is a strong theme in the report, and “scaling up customer demand” is the first of the 12 proposed solutions.

The report says that customers have a significant influence over how shipping manages its emissions. One example is when the demands of the companies that charter ships are influenced by the demands of the consumers of their goods. The report cites the example of some consumers now choosing to buy certain products, such as cars and household items, according to carbon-emission labels. This pressure from the final customer then influences the behaviour and choices of those in the supply chain. 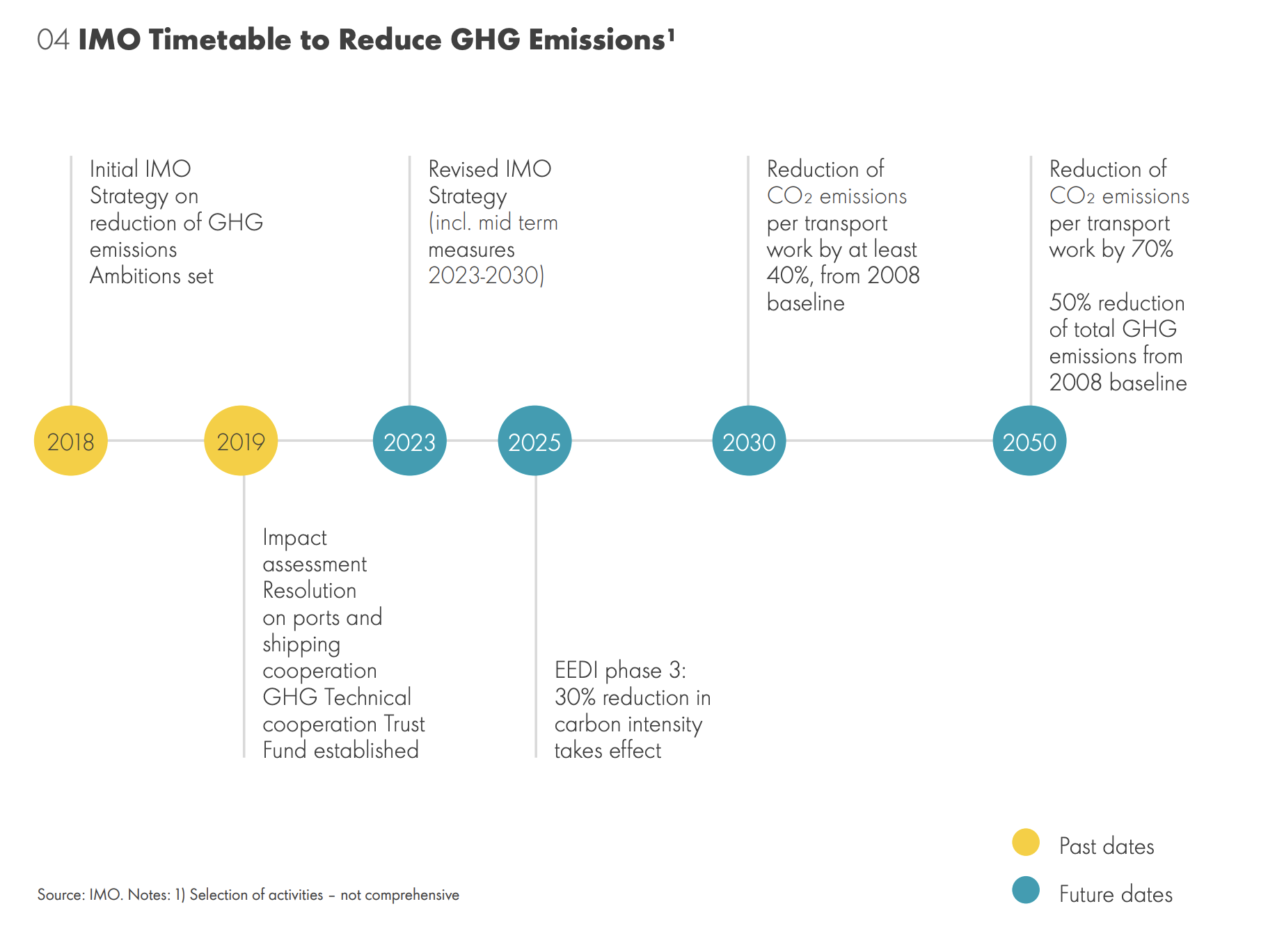 Many of our own customers are taking action. Volkswagen is set to become the first car maker to use ships powered by LNG to transport vehicles and parts on a long-distance route, in this case from Germany to Mexico. LNG emits up to 21% less greenhouse gas emissions than traditional marine fuel, depending on the engine used. Another example is the consumer goods company Unilever, which recently announced that it would put labels on all its products to show how much carbon dioxide was emitted in manufacturing and shipping as part of its campaign to tackle climate change.

As Shell’s head of Downstream, which is responsible for shipping, I relish the prospect of working with customers, partners, suppliers and wider society to achieve lasting change. I am buoyed by the optimism of this report, by the action being taken today and the strategy being discussed this week. We cannot wait. Now is the time to take action.